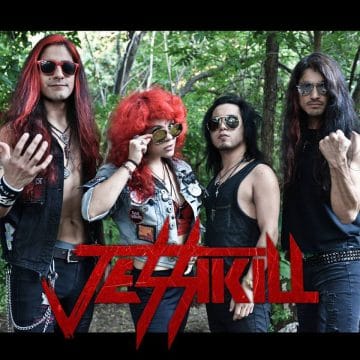 “If you ever wondered what Yngwie J. Malmsteen would sound like in a Dio or Iron Maiden sounding band with one of the best female singers around, Jessikill may well provide that answer. Guitarist Jyro Alejo is a master guitar shredder who can definitely cram in many notes a la Yngwie while playing ultra fast. There is no denying this guy can shred like almost nobody else but does his playing fit with the classic heavy metal sound that Jessikill offers? The answer is yes and no. Sometimes, Alejo‘s guitar shredding works quite well while other times, it borders on overkill or seems to awkwardly fit the songs. There are lot of influences that can be spotted on Metal Knights from the Iron Maiden like guitar melodies especially after the chorus on “The Beast” to Hessler on “Metal Knights” with the gang vocals and general feel of the song to Dio on the slower paced tracks. The former is no surprise since Alejo also plays in an Iron Maiden tribute band called Seventh Son.”