Jessikill release video for “Give It All”

San Antonio, Texas, USA based Jessikill consisting of former Hessler lead vocalist Jessikill, guitarist Jyro Alejo, bassist Arturo ‘Knight’ Alvarado and drummer Jordan Ames have released a live video of their song “Give It All” which is on their 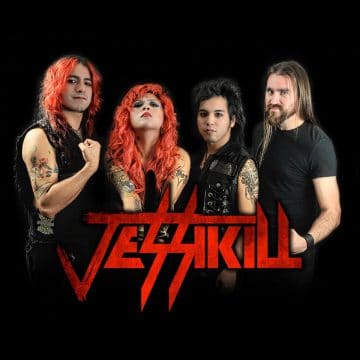 full-length album Another World released back in early 2018.

The band’s “Biography” on its Facebook page states (with slight edits):

“Jessikill is a heavy metal band hailing from Texas.

Often compared to the likes of Iron Maiden, Dio, Halestorm and Manowar – their uniquely orchestrated music and stage performance has carved their way to international success.

Jessikill albums are known for their high quality productions – Another World (the band’s debut release) was released worldwide in 2018. The album is the birth of a new metal sound.

Jessikill‘s “Give It All” video: