Jessikill to team up with Tim “Ripper” Owens for four shows

Power metal newcomers Jessikill are teaming up with ex-Judas Priest frontman Tim “Ripper” Owens for four shows in the state of Texas, USA where they will be delivering a set of Judas Priest and Dio classics. 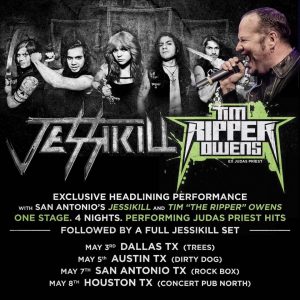 Jessikill made the following announcement today via their Facebook page:

Sleaze Roxx stated the following in its review of Jessikill‘s recently released EP Metal Knights: “If you ever wondered what Yngwie J. Malmsteen would sound like in a Dio or Iron Maiden sounding band with one of the best female singers around, Jessikill may well provide that answer.”

Back in early March 2016, Sleaze Roxx attended a show dubbed “A Special Night Of Metal” which featured an all-star group that included Tim “Ripper” Owens. Sleaze Roxx stated in its concert review: “If there is one guy that can handle singing songs from world famous heavy metal singers like Judas Priest‘s Rob Halford, Iron Maiden‘s Bruce Dickinson or Ronnie James Dio (Rainbow, Black Sabbath and Dio), it has to be Tim “Ripper” Owens. He just made it look easy out there. In fact, he is such an unbelievable singer that it seemed that he was holding back when singing songs such as Megadeth‘s “Symphony For Destruction” so as to stay true to the original and Dave Mustaine‘s “ahem” singing. On that track as well as the two Metallica songs that he sung, it just felt like Owens could have taken them to another level with his singing but he was holding himself back.”