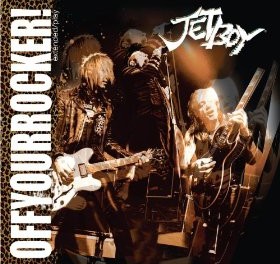 Jetboy have signed with Rock It Up Records to release their latest EP, ‘Off Your Rocker’, in Europe through the label’s City Of Lights subsidiary.

Originally released in 2010, ‘Off Your Rocker’ consisted of three new studio tracks and three live recordings. At the time of its release Sleaze Roxx stated, “Jetboy seem to have recaptured their creative spark and here’s hoping this gives the band the kick in the ass they need to record a full-length album. If they are able to make an entire CD that sounds as good as the first three songs on this EP we will all be in for a treat!”

“Jetboy are among our favorite bands, said Franko Sturm of Rock It Up Records. “All the more we are pleased to welcome the guys around singer Mickey Finn and guitarist Billy Rowe finally in the band roster of City Of Lights Records.”