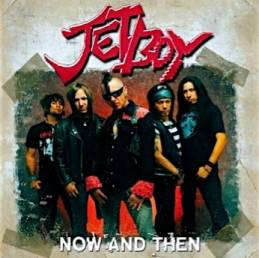 Jetboy Releases ‘Now And Then’ Compilation

Glam & Sleaze Rock Veterans JETBOY have inked a deal with Demon Doll Records to release a Greatest Hits compilation CD entitled “Now and Then”. Comprised of the band’s strongest material from 1986 to present, “Now and Then” gives fans a collection of Jetboy tunes that will satisfy their every taste.

The entire 14 song CD drips Glam, Blues, Sleaze and Punk that fans have come to expect from the legendary San Francisco bad boys. The new album will be available exclusively for sale worldwide distribution through DemonDollRecords.com on Halloween October 31st, 2010.

“Now and Then” pushes the envelope with remastered versions of their biggest hits, “Feel the Shake”, “Make Some Noise” and “Snakebite” from their 1988 Billboard Charting debut “Feel the Shake” as well as “Stomp It (Down To The Bricks), “Evil”, “Heavy Chevy” and “Bullfrog Pond” from their 1990 Sophomore Release “DamnedNation”.Never before has Jetboy ever offered a comprehensive greatest hits package of this kind.

Jetboy’s distinctive sound will hearken you back to the late 80’s and early 90’s with the new whiskey soaked, groove oriented smash tracks “Going Down (Above the Clouds)”, “Perfectly Wrong” and “Dogs Gotta Roam” as well as cutting loose the brand new,never released ass kicker “Dying Inside”. This is a must have for every Glam & Sleaze fan on the planet!

Sharing the stage with the likes of The Scorpions, Motley Crue, Kix, Whitesnake, Poison and Cheap Trick as well as terrorizing Headbanger’s Ball into heavy rotation with their videos “Evil” and “Feel The Shake”, it’s safe to say that Jetboy have left their mark on the Glam & Sleaze scene for many years, and with “Now and Then” – Jetboy’s Greatest Hits, the band is poised to usher their fans into 2011 with an updated sound based in classic grinding blues. “Now and Then” is a total package designed to escort fans who still believe in one of the greatest eras in Rock ‘N’ Roll History!

To purchase “Then and Now”, please visit Demon Doll records at demondollrecords.com/Jetboy_-_Now_and_Then.html