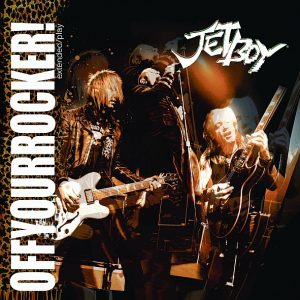 Rock It Up Records‘ press release states in part (with slight edits):

After parting ways with original bass player Todd Crew in mid-1987, the band was joined by former Hanoi Rocks member Sami Yaffa. In August of 1987, Todd Crew died due to a drug overdose in the hotel room of Guns N’ Roses guitarist Slash.

The second album “Damned Nation” was released in 1990.

In the following years, Jetboy released some compilations & live-recordings also, among other things “A Day in the Glamourous Life” (1998), “Make Some Noise More” (1999), “One More For Rock ‘n’ Roll!” (2002) and “Now And Then” (2010). In this time, the band played tons of concerts and festivals with bands like Twisted Sister, Warrant, Ratt, Whitesnake, Scorpions, Cinderella, etc.

However, over two decades after releasing their debut album “Feel The Shake“, Jetboy are still on the road for touring and recorded the new mini-album “Off Your Rocker!“

As first “Off Your Rocker!” was to get as digital release only, the band produced a few copies for the shows.

Now the Mini-Album will be released for the european fans via City Of Lights Records as “European Edition“.

“The new songs are some of Jetboy‘s best work” writes Sleazeroxx.com as one the first feedbacks…

Sleaze Roxx stated the following in its review of Off Your Rocker! back in 2010: “Jetboy seem to have recaptured their creative spark and here’s hoping this gives the band the kick in the ass they need to record a full-length album. If they are able to make an entire CD that sounds as good as the first three songs on this EP we will all be in for a treat! Hopefully the departure of the rhythm section doesn’t set the band back, but with original members Finn, Fernie Rod and Billy Rowe still plugging along everything should be fine in Jetboy land.”

Jetboy‘s “Going Down (From Above The Clouds)” song: