Jetboy are currently in the midst of working on a new studio album, which will include former Faster Pussycat bassist Eric Stacy, and will be released via Frontiers Music Srl. 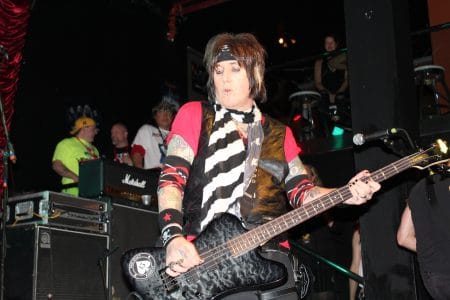 The following message was posted on Jetboy‘s Facebook page on September 16, 2017:

“Demo bass parts being recorded this weekend with Eric Stacy for the new Jetboy album!”

In addition, back on August 4, 2017, the following message was posted on Jetboy‘s Facebook page:

“JETBOY are excited to announce they have officially joined the Frontiers Music srl family! yes, we signed a deal with this mighty label and a new album is in the works! Feel The Shake was recorded 30 years ago, why stop now… thumb in the air, ride on!”

Sleaze Roxx stated the following in its review of the reissued Jetboy classic Feel The Shake album: “What can I say about Feel The Shake? What a great fuckin’ album! I will admit that it took me a few listens to appreciate the greatness of the album and that’s mostly because the pace of the songs are a bit slower than they are likely played live.”

Decibel Geek Podcast Presents:Jetboy – Feel The ShakeCaptured live at Rock N Skull 2016 at the Tree of Joliet in Joliet, Illinois by Rockin’ RonSubscribe to …