House Of Lords guitarist Jimi Bell was recently interviewed by All Music & All Bands: Local, National & Worldwide and asked what his audition experience was like for Ozzy Osbourne‘s vacant guitarist position back in 1987. 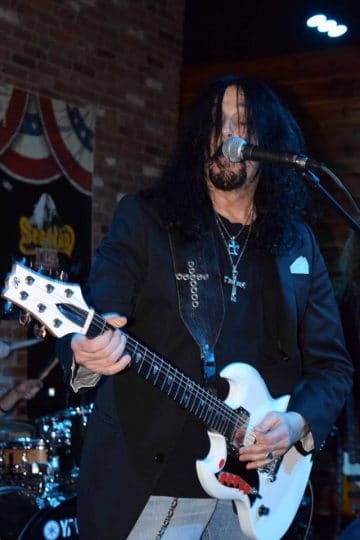 Bell stated (with slight edits): “It was incredible. They had already been working with Zakk [Wylde] but Sharon [Osbourne] received a video of me playing from Kramer guitars who I was endorsed by in the 80s. They flew me out and I auditioned with Randy [Castillo] and Phil [Soussan] first. Sharon sat in on my audition which she didn’t do on the others. There were like 500 guitarist[s] that they tried out. After I was done Sharon said I was going to play with Ozzy the next day. That was an incredible experience. Ozzy came in and I played about 5 tunes and a guitar solo. Besides Zakk, I was one of the only people to actually got play with Ozzy. After the audition they sat me down and said it was between Zakk and myself. I still get asked about it all the time. A memory I will always cherish.”

Bell was also asked about writing a song for Black Sabbath‘s 1992 album Dehumanizer but not receiving any writing credits. Bell replied (with slight edits): “Sharon knew Geezer [Butler] was looking for a guitarist so she sent him my video. When I got the call from him I was floored. I always thought he was amazing. First he flew me to his home in St. Louis. Then next to Birmingham, England. We practiced in this old air force base that they turned into a full on rehearsal rooms with sleeping facilities and catering. Geezer was writing heavy, but a bit more commercial sounding songs for this project. One night he came to me and ask me if I could do a track in the vain of Sabbath. That’s when I wrote “Master of Insanity.” I wrote all the music and even title the tune. Geezer of course wrote all the lyrics. We show cased and apparently we were getting a deal with MCA records. When I got home I received a call from Gloria Butler saying the guy who signed us got caught doing something wrong and was let go. Shorty after when Dio decided to rejoin Sabbath I got a call from Gloria saying they were going to use “Master of Insanity” on the new “Dehumanizer” CD. I was thrilled until she said I couldn’t be listed as a writer. It was explained that Tony [Iommi] would never let a song by an outside writer on a Sabbath record. So I just let it go. However, I was told I would get paid for the song after the tour was over. I never received a dime. Another lesson learned.”

House Of Lords have a new album entitled Saint Of The Lost Souls, which will be released via Frontiers Music Srl on March 24, 2017. Bell was asked how much did he contribute in terms of writing House Of Lords‘ new studio album when all members are in different locations, to which he replied: “I have a lot to do with the writing ever since I joined in 2005. Bj Zampa and I live very close to each other. I’ll basically write what I consider to be a completed track( just music, no lyrics or melodies) then present it Bj. He’s a good arranger and has great ideas. He’ll either like it the way it is or move a few things around. Then we record it in full. All Guitars, Bass and Drum tracks and then send it to James. Then it’s up to him if the track is good for HOL. We always give James between 15 and 20 songs to pick from every CD.”

You can read the rest of the interview with Bell at All Music & All Bands: Local, National & Worldwide.