Back in December 2019, the BulletBoys announced that their original line-up of D’Anda, lead vocalist Marq Torien, guitarist Mick Sweda and bassist Lonnie Vencent, was reuniting once again and would be releasing new music together. The reunited line-up did play a number of shows together but no new music was released in the next two years. Eventually in early January 2022, Sweda announced that he and D’Anda were no longer part of the BulletBoys. 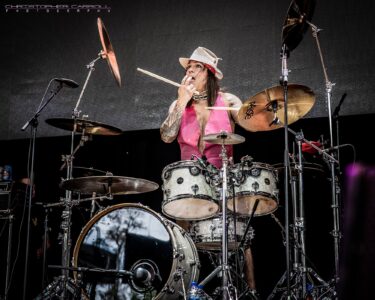 Early on during the interview with Vinyl Writer Music, D’Anda revealed: “It’s funny because – and we’ll talk about that in a minute – but listen, I just closed the chapter on BulletBoys after thirty-three years. We were a band for seven years, and I think I played a couple of shows in ’99 with them, and then I played one show in 2010 with them, and we just did a two-year – I’m gonna call it a two-year stint. I left the band and I’m done for good, but I think with anything in life when you’re closing a chapter on something that was so large in your life and it really affected your life in such a deep way, you kind of have to go back.”

Later during the interview, DiCecco asked D’Anda about his decision to leave BulletBoys for good to which the drummer replied:

“It’s really a tough thing. First thing’s first; nobody didn’t think that this was gonna go up in a ball of flames. I mean, everybody knew it; everyone knew that it was gonna end badly. What I was hoping for was that it wouldn’t end horrifically, and hopefully, we can go out there and make some money and possibly have some dialogue or communication, so that even if it does go away, it isn’t a “Fuck you, motherfucker!” You know, maybe it’s from time to time we get together and we go do shows. Maybe every now and again there’s a really nice offer from Mötley Crüe to open up … “Fuck, yeah! Let’s go do it.” I was hoping for that kind of stuff. But again, like I said, the reason I left in the early years was there was a lot of negative energy. I don’t think I need to point any fingers because everyone knows who it’s about.

But there comes a time in everyone’s life when people start saying shit about you, and you’re like, “I’m in a band with you, dude.” And someone is trying to get you kicked out of the band to replace you with another drummer because he’ll play during Covid but I won’t play. There’s so much fuckin’ bullshit; I didn’t sign on for this. I really don’t need to be here; for that matter, I don’t need to be anywhere. Because you know what? I swear to God, I’ll tell you right now, I’ll go back and work at fuckin’ Guitar Center and be happy. I don’t need to have stress and anxiety in my life. I did it when I was in BulletBoys when I was a kid; I was nineteen or twenty years old. I was put through fuckin’ hell during that time because I was a kid. I got hazed all the time by these guys. By all of ‘em. Mick, maybe not as much, but definitely Marq and Lonnie. I went through a lot of shit. I hoped that people were in a better place, and there was a while there I thought that maybe everybody was, but then you start hearing people, “Oh, you know he said this about you,” or, “You know, he’s doing this now…” After a while, it’s like, “Wait. Hold up, hold up, hold up.”

And here’s what’s funny – nobody knows this – I quit the band in September and then I called the manager and said, “Larry, I think you should keep going on with BulletBoys.”  He goes, “Jimmy, I’m gonna try.” I go, “Yeah. I’ll even help you guys find a drummer,” because I wanted to try to leave them in a better place than I found them. Then little by little, I’m starting to hear other comments and other things are being said. Then Covid, of course, during that time period is just running rampant and there’s too much other nonsense going on. It should be much easier; it shouldn’t be this hard. And so, by the time the last two shows were coming around, it was emotional. When I played that last show with them at Monsters on the Mountain, I walked off stage and I literally exhaled really large because I realized thirty-three years of my life with this band had come to an end. It’s over. There’s no doubt in my mind. Because there was always a question mark over the last ten or fifteen years; maybe I could do it; maybe we could go back; maybe we could actually be friends a little bit, enough to actually have a career, make some good money, and make music. I know that’s not gonna happen now.

So, Larry asked me to stay on for the last three or four shows, and I did. And then during that time, it just became such a fiasco and there’s so many negative things that are happening. It’s such a bummer. It’s like, “You know what? I didn’t want this to end like this, but apparently, this is how it’s gonna end now.” So, then I quit, and then the Whisky show rolls around and there was more drama. And then Larry, the manager, quit. Then Mick called me, and he goes, “Dude, I did not sign on for this. This is just way too much fuckin’ bullshit.” He couldn’t deal with it, so then he quit. I’ve only heard through the grapevine that Lonnie quit; I haven’t talked to him yet, but I heard he was like, “Dude, there’s no way I’m going back. Just me and Marq is not gonna happen.”

Again, listen, I’m sad for the fans, too. I’m sad that I didn’t get a chance to go out and show people, “This is what I was known for.” Don’t get me wrong, I love playing with George, but going out and playing songs I was known for was gonna be a nice little treat. Listen, there’s a reason why people get divorced from their wives and their husbands. I left one wife, which is George, to go back to an ex-wife and then realized, “Oh, no. Wrong one. Sorry!” Listen, man, honestly, I wish everybody the best. Everybody go out there and live your best lives. Stop being a fuckin’ dick, go work your ass off, make money, come home to your family, and be a good person. There it is.”

You can read the rest of the interview with Jimmy D’Anda at Vinyl Writer Music‘s website.