Radio mogul and former That Metal Show co-host Eddie Trunk advised via Twitter yesterday (see below) that drummer Jimmy DeGrasso reported to him that he is no longer a member of Ratt and the group featuring singer Stephen Pearcy and bassist Juan Croucier will be unveiling the new band line-up at Ratt‘s upcoming gig at the Kansas Star Casino in Mulvane, Kansas, USA on July 7, 2018.

Back in March 2017, DeGrasso and Black Star Riders had announced that they parted ways so that DeGrasso could essentially play in Ratt alongside Pearcy, Croucier and guitarist Warren DeMartini.

A year later (in March 2018), rumours were circulating that DeMartini had been kicked out of the band by Pearcy and Croucier. Later that month, guitarist Carlos Cavazo reportedly advised Metal Sludge that he was not interested in continuing with Ratt if DeMartini was out of the band.

Of note, Monaco posted the following Facebook message on June 27th shortly after quitting L.A. Guns: “Wouldn’t it be AWESOME if every song was one long GUITAR SOLO!? I

Another possibility would be for Ratt to have guitarists Toni Aleman and Mike Moore fill the guitar duties as the duo would be very familiar with the Ratt songs from playing them with Croucier over the last few years as Ratt’s Juan Croucier. 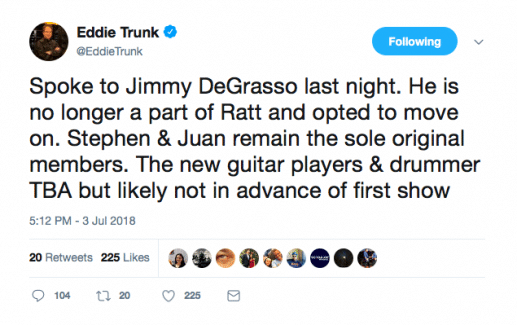