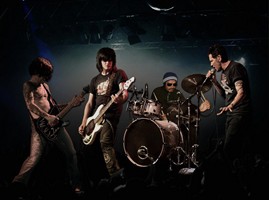 L.A. Guns’ live album ‘Acoustic Gypsy’ is slated for release on September 27th, but already vocalist Jizzy Pearl has announced he will be leaving Tracii Guns’ version of the band after two years.

Said Pearl in a recent posting, “After an amazing two years in L.A. Guns I have decided to move on. This decision was not based on anger or animosity — I have nothing but respect for Tracii and the guys. They can and will carry on better than ever. I wish all good luck and good music in the future.”

Jizzy Pearl (also known for his work with Love/Hate and Ratt) initially joined L.A Guns back in 1999 and recorded the album ‘Shrinking Violet’, however he departed when the classic line-up of the band reunited for 2001’s ‘Man In The Moon’. Since that time varying editions of L.A. Guns have been in existence, with guitarist Tracii Guns’ version recruiting original singer Paul Black, Marty Casey of Lovehammers and finally Jizzy Pearl.

In March of this year Pearl released his third literary offering ‘Unhappy Endings’, a book written from his own experiences that takes the viewpoint of a rock star that has lived the life teens dream about.