Love/Hate frontman and former Ratt, L.A. Guns and Quiet Riot singer Jizzy continues to provide his insights on what it was like back in the Sunset Strip in the mid to late ’80s.

The following message was posted on Pearl‘s Facebook page on March 19, 2018: 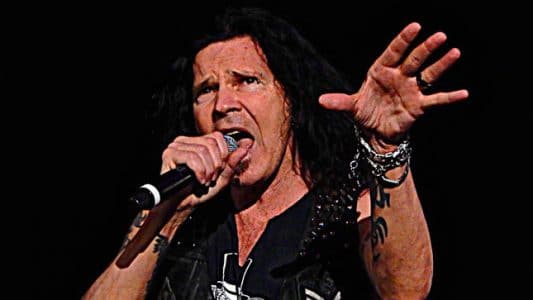 Here’s a scenario for you right out of H.G Wells. Join a band, move into their crummy building in Downtown L.A., struggle and starve for 4 ½ years and then get a million dollar record deal. Sound like science fiction? It actually happened. And we did it without a single ‘like’.

Imagine living in a building in Downtown L.A., right near Olympic Blvd and 7th street. A bustling produce market by day and the eerie quiet and emptiness of the Walking Dead by night. The quiet of the night broken only by the crash of broken glass as thieves attempted to break into your car. Walking in a neighborhood every day inhabited by the Homeless–you know Them, they know You. They scavenge bottles, cardboard and aluminum; you scavenge Hope. Even thought it sounds surreal it was Life then, the band was your life, the band was your job. No money? That’s fine you had the band. Everyone hates you? No problem you had the band. The idea that the next batch of songs could be the Ones, that kept you going. The cliché` you hear about record companies coming to your show, it actually happened. They came, they watched you play. And occasionally they stayed til the end and spoke to you. Most times not though, most times you went home drunk and disappointed. And you did this, night after night, year after year. Another batch of songs, another stab. More disappointment, more drinking.

Life goes on–1986 turned into 1987. There is a new excitement on the Sunset strip, like flowers that only bloom once a year there is a time and a place and you need to be there to see it shine. Didya hear, Guns ‘n’ Roses just got signed! What does that mean? They’re still broke, they still look the same. Didya hear? L.A. Guns just got a new singer and he’s from England…England? Really? Life goes on, you find a new promoter that will put you on stage. You open for Guns ‘n’ Roses, you open for Faster Pussycat—hey they just got a record deal too! You start dressing up more, everyone around you looks like they just got off stage, it becomes normal. You go back to your building in Downtown L.A. with your Tascam 4-track machine and now the songs sound familiar, they seem to fit in—you seem to fit in. You get a break, there’s a new jam night opening up every Monday night at the Whisky, 20 minutes per band and you get to play your best songs. And for once you don’t have to sell tickets because you can’t–no one ‘likes’ you, remember? It becomes your Vehicle, instead of playing every six weeks you start playing every week and you get better at your craft. It becomes natural to be on stage, you become the person you need to be and you don’t even see it happening. Still no money, still desperate but poised for a shot, like a bullet loaded into a gun.

Suits start sniffing, here a lawyer there a lawyer Everywhere a lawyer lawyer. Sign this, read this, a ferret has more business sense than you do. Sometimes you sign, sometimes you get lucky and you don’t sign. Then you meet a real lawyer and it really works, you meet Tom Werman and check it out–Look at all his gold and platinum records! He ‘likes’ you–that’s something. Then the record companies start sniffing, it doesn’t matter that a year ago you were a joke and a laughing stock, that’s the beauty of being at the right place at the right time and having the right songs playing the right gig. It sounds simple but it’s really a Rubix Cube that we were able to puzzle out one wintry night December 1988. And the rest is history…”

Wikipedia states the following about Love/Hate‘s beginnings (with slight edits): 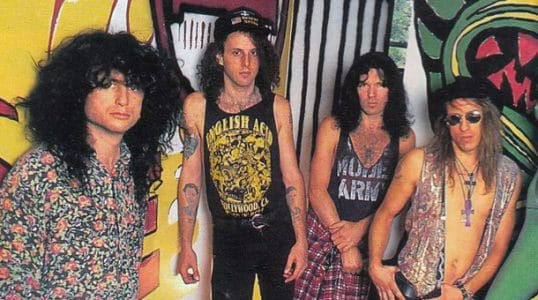 “Love/Hate was formed in 1985, when Jizzy Pearl (real name Jim Wilkinson) joined Jon E. Love, Skid Rose, and Joey Gold, in an 1980s influenced electronica band called Dataclan, after their previous lead singer walked out while playing in Japan. They lived together in an LA warehouse called SoulHouse, and in the first year put out a 4 track EP and played a short and not very well received tour of Mexico. At this time the band had a very ‘glam’ look, wearing make up.

In 1986, the band renamed themselves as Love/Hate from a song they played at the time called “Love and Hate.” They also changed their look and style to a more gothic image, having been influenced by the release of the album Love by The Cult. For the next couple of years, they tried various styles of music and were pitched to many record companies in an attempt to get signed.

1987, the band settled on the rock genre, and had some limited success, when one of their songs was used on the soundtrack for Critters 2 and an early version of “She’s an Angel” featured in the movie A Nightmare on Elm Street 4: The Dream Master. Around this time, they briefly employed guitarist Tracy G, who would later play in Dio. After seeing a video of a drunken performance, lead singer Jizzy resolved to turn himself around.

In early 1988, Skid wrote a new collection of songs, which would later form the bulk of the album Blackout in the Red Room. They began performing regularly at the free Monday night ‘No Bozo Jam’ at Sunset Strip‘s Whisky a Go Go. This freed them from self-promotion of one off gigs and they began to collaborate as a band to improve their repertoire of songs. However, the band felt much frustration as at that time many Sunset Strip were being signed by record companies, with glam metal at its height, but Love/Hate were repeatedly overlooked.

The band then put together a 4 track demo engineered by guitarist Jon E. Love, and in December 1988 finally got a record deal with Columbia.”

Love/Hate – Blackout In The Red Room