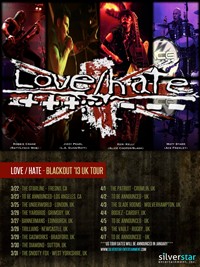 Frontman Jizzy Pearl is taking a revamped version of the iconic Los Angeles band Love/Hate to the UK in 2013 for the ‘Blackout ’13’ tour.

Said Kelli, “Through March and April I will be joining my brothers in ROQ Jizzy Pearl, Robbie Crane and Matt Star as we do battle with the diehard Love/Hate fans in the UK. Would really like to see you ALL out on these special shows, as you know we don’t do them often.”

Reminiscing about a previous trip to the UK Pearl stated, “Love/Hate first went to Ireland in 1991 with Skid Row. Northern Ireland was at that time still an unstable place and most bands would not go there but we did. Sebastian (Bach) was told not to say anything remotely political on stage but of course he did. Next time was with Adler’s Appetite and the barbed wire and machine gun nests were replaced with organic coffee bars and red-headed lovelys. All of us are looking forward to going back there again.”

For those wishing for a reunion of the original Love/Hate band, Pearl, bassist Skid and guitarist Jon E. Love will be playing a free show at Count’s Vamp’d Rock Bar in Las Vegas on January 5th .

Love/Hate burst onto the music scene in 1990 with their debut Sony release ‘Blackout In The Red Room’ which garnered ‘Best album of the Year’ from Both Kerrang! Magazine and Metal Hammer. Love/Hate then went on a two year tour sharing the arena stage with AC/DC, Ozzy Osbourne, Dio and Skid Row.