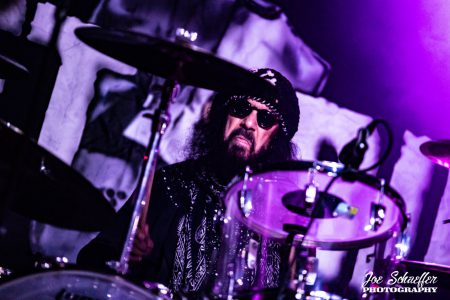 Akin reported to Sleaze Roxx that Pearl indicated that the current Quiet Riot line-up, which also includes bassist Rudy Sarzo, guitarist Alex Grossi and drummer Johnny Kelly, will be releasing “new music”, but some of it will be reworked versions of the songs the singer did with them on the 10 album, that was released and then pulled.

Pearl handled the lead vocals on six of the ten songs from the album 10 that was released back in July 2014.

In terms of the new material, Pearl indicated (as provided by Akin): “It’s been revamped. Basically, Frankie‘s drum tracks have been… you know that game Operation where you take the tweezers? We pulled his drum tracks and have written all new music for that. So yeah, yeah. There’s new music. Hopefully people will dig it. We’ll see.”

You can listen to the interview with Jizzy Pearl on The Classic Metal Show via the Odysee website.

Quiet Riot‘s last studio album consists of Hollywood Cowboys, which was released back in November 2019 and featured Banali on drums, Grossi on guitar, Chuck Wright on bass and James Durbin on lead vocals.