Jizzy Pearl thinks back to his times in L.A. Guns and Ratt

Quiet Riot frontman Jizzy Pearl was recently interviewed by Marko Syrjala for Metal-Rules. Pearl handled the lead vocals in L.A. Guns from 1999 to 2000 and in Ratt from 2000 to 2006.

Pearl was asked why his tenure in L.A. Guns along with guitarist Tracii Guns, drummer Steve Riley and bassist Johnny Crypt didn’t last long to which he replied: “Well, it didn’t last because those guys all decided to get back together, all the original members, Phil Lewis, and the other guys. They were offered a lot of money. Again, it’s financial to get back together and tour, so I was out in the cold. And then, eight months later, I joined Ratt. And they were opening for me [laughter].” 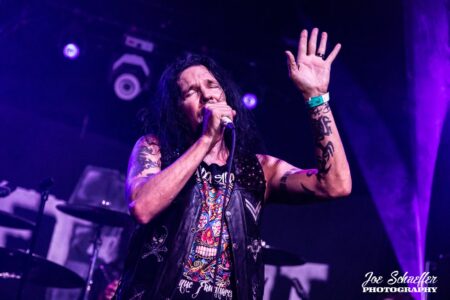 Pearl rejoined Tracii Guns‘ version of L.A. Guns for the release of the album Acoustic Gypsy in 2010 but that union didn’t last long to which he stated: “Yeah, yeah. It was just time for me to go. We did that record, and it was a time when people were downloading music for free, and there was a period where I didn’t quite understand that this was just the future. And I was in– My royalty checks disappeared just like everyone else’s—no more checks. And I had a little chip on my shoulder about it. Until I realize that it’s just the way– You know what I mean? It’s like vinyl went to CD and little phones went to cell phones, and it’s the future and just deal with it. And now, I’ve made a bunch of solo records. Since that time, just for the pleasure of making them. I don’t expect that I’m going to get rich off Golden Robot or Frontiers or something like that. I make the records because I enjoy the process.”

It was noted to Pearl that Ratt didn’t release any original material during his tenure in the band to which he commented: “No. Because they were all suing each other. That’s why. They were suing Stephen, and Stephen was suing them. And we couldn’t do it, and that’s it. Those guys really don’t like each other, you know. There’s a lot of — I mean, you talk about love-hate, but they all hate each other.”

You can read the rest of the interview with Jizzy Pearl at Metal-Rules‘ website.