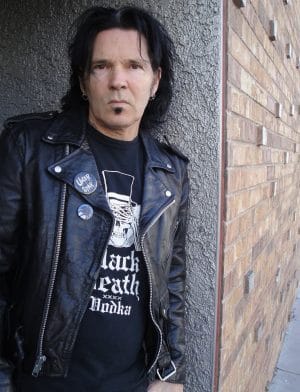 has reported that current Quiet Riot and Love/Hate frontman Jizzy Pearl will be touring next year on his own in the UK to celebrate the 25th year anniversary of the release of Love/Hate‘s album Wasted In America.

Various tour dates for Jizzy Pearl/Love/Hate have already been posted on Facebook for 2017 with the following announcement for March 23, 2017: 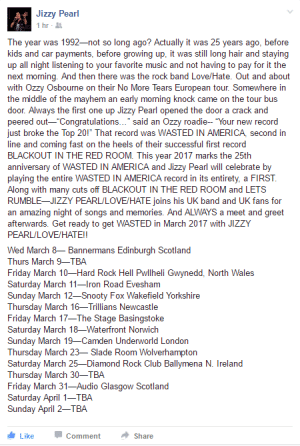 “THIS IS IT! Jizzy Pearl/Love/Hate! The 25th Anniversary of Love/Hate’s second record WASTED IN AMERICA played in FULL FOR THE FIRST TIME along with songs from BLACKOUT IN THE RED ROOM and others. Get ready to get Wasted in 2017!! With special guests Bulletproof Rose“

Sleaze Roxx stated the following about Love/Hate in its review of the band’s third studio album Let’s Rumble: “Love/Hate is one of those bands that was always on the brink of success and never seemed to break into the mainstream. Sure, some songs got air play like “Blackout In The Red Room” and “Don’t Fuck With Me.” But the band was not getting spun as frequently as say Bon Jovi or Guns N’Roses. But they did develop a solid fan base and continued to release albums, and to this day continue to tour. Skid is the song writer of this band yet Jizzy Pearl is the lead singer. Jizzy‘s pipes are so impressive he has since been the front man of L.A. Guns for a few years in the late 90’s and currently is tearing it up as Ratt‘s front man and is even working with Steven Adler in a Guns N’Roses style band called Adler’s Appetite.”

Back in March 2016, Rock Candy Records announced that it was re-issuing Love/Hate‘s first studio album Black Out In The Red Room.