In a soon to be published interview with Tyson Briden for Sleaze Roxx, guitarist JK Northrup spoke about King Kobra‘s King Kobra III album and how the band ended up touring behind that album but without drummer Carmine Appice. 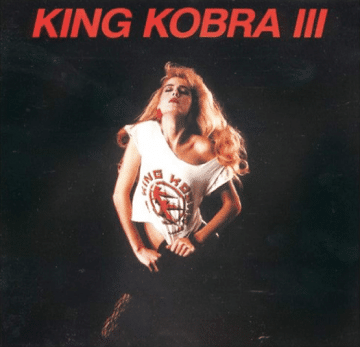 Northrup stated: “Well [laughs]… So true story. After we shot the video for “Take It Off,” Carmine joins up with John Sykes and Blue Murder.  So he asked if our band Northrup would go and tour for the album. We did, since three of the members on the album were on stage for the shows. To get some publicity as to why Carmine wasn’t on stage with us as King Kobra, he made up the story that our drummer, Glenn Hicks, was his cousin! Funny shit. Needless to say, it didn’t go over very well, so we pulled the plug and resumed as Northrup until we disbanded in 1989-90.”

Wikipedia states the following about the King Kobra III album (with slight edits):

“King Kobra III, released in 1988 on New Renaissance Records, was the first and last album by the [Johnny] Edwards, [David] Michael-Phillips, Northrup, [Larry] Hart and Appice line-up of King Kobra. After the demise of the original line-up, remaining members Carmine Appice and David Michael-Phillips teamed up with Johnny Edwards, Jeff Northrup and Larry Hart, all three members of the Sacramento, California band Northrup at the time.

The album featured a strong selection of 1980s style mainstream metal. However, a lack of album sales resulted in the dissolution of the band. Bassist Johnny Rod, who appeared on the first two albums as bassist, does not play here. However, he does contribute backing vocals. The model posing on the album cover is Carmine‘s then wife, Sarah Appice, who also makes a cameo appearance in the “Take It Off” promotional video.”

KING KOBRA – TAKE IT OFF