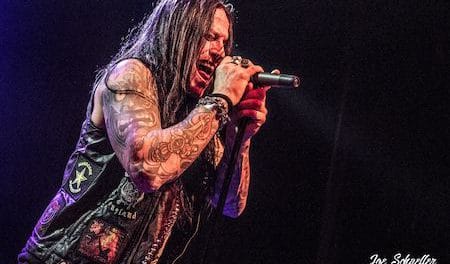 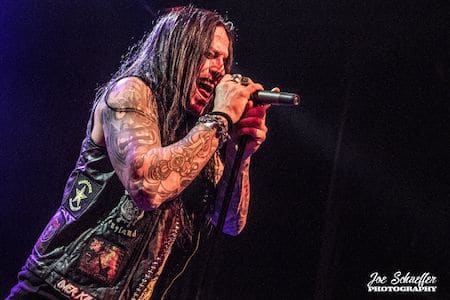 Hardcore Superstar frontman Jocke Berg was recently interviewed by Mark Diggins for Australia’s The Rockpit. Hardcore Superstar will be embarking on their Abrakadabra Australian Tour 2022 along with Catalano and Emergency Rule from November 14 to 19, 2022.

Diggins asked Berg to take him through the very beginnings of the band 25 years ago. Berg stated (with slight edits): “It started in ’97 we played in this rock and roll grunge orientated band because at that time Alice in Chains were big and everyone loved them. I still love them. But I grew up with bands like Mötley Crüe and L.A. Guns and also Suicidal Tendencies and Anthrax and those kind of bands. So one day I said “I’m leaving the band and gonna start a new band”, so me and Martin (Sandvik – bass) did and that was the beginning of Hardcore Superstar. Then we asked [Thomas] Silver to join us and he did, and back then we had a drummer called Mika (Vainio) who left the band only a year after we released the first album ‘It’s Only Rock ‘n’ Roll’ so I called up Adde 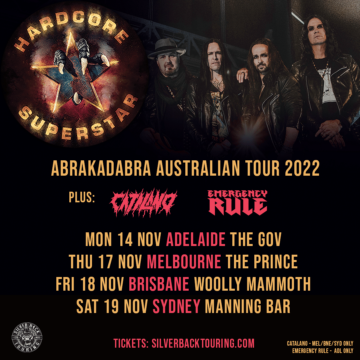 (Andreasson) who was  at MIT in L.A. studying drums. So he came home and joined the band and then we got signed with Music For Nations and we did three albums with that label. It was very educating to be on that label because back then Music For Nations were a big rock label, but they wanted to interfere with our sound and our music and you can’t do that with Hardcore Superstar. But we were stupid back the and listened to them because they were a big label. I remember once they said to us “Can’t you sound a little more like The Hives?””

Berg added: “And I was like “What?” I mean I love The Hives but Hardcore Superstar is not The Hives! I mean we have the same letter in the beginning but I can’t sing like Howlin’ Pelle, that won’t work out. But we did three albums that didn’t sound alike at all so we were kind of fed up and so we took a break for almost one year: we almost broke up actually. And then Adde called me up one day and said “Should we do one more album? We should do an album that we all like to play and we dig” So I thought “Let’s do that”.  So we recorded ‘Wild Boys’ a demo in our studio  and it turned out so great that the songs just came to us.  I used to say that our self-titled album is ‘year zero’ for Hardcore Superstar when it all started, so actually it’s not 25 years, you know what I mean? And the rest is history, I think we managed to put out albums that are pretty good after that.”

You can read the rest of the interview with Jocke Berg at The Rockpit‘s website.

Hardcore Superstar‘s “Someone Special” video (from Bad Sneakers and a Piña Colada album released in 2000):