Def Leppard frontman Joe Elliott was recently interviewed by Mitch Lafon for the Rock Talk with Mitch Lafon podcast. The singer spoke about Def Leppard getting discovered by and working with world renowned producer Robert John “Mutt” Lange who ended up producing the albums High ‘n’ Dry (1981), Pyromania (1983) and Hysteria (1987). Lange ended up being an executive producer for Def Leppard‘s 1992 album Adrenalize. 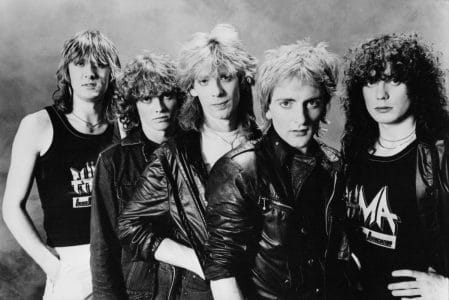 “Mutt Lange was AC/DC‘s producer when they were out on their ‘Highway to Hell‘ tour, and we got the support slot on the ‘Highway to Hell’ tour because we ended up with the same management as AC/DC.

“By the time we got onto the ‘Highway to Hell‘ tour, we were kind of on trial to see how good we were.

“We were kind of on-board and Mutt would come to see AC/DC and Peter Mensch, who was our representative, begged Mutt to come to watch the band, he was already in the building, so he said, ‘Will you come and watch my new singings?’

“And Mutt saw us, and in his words that he said that night, which was at the Bingley Hall in Staffordshire, he said, ‘I saw a rough diamond, I saw a massive potential that needed a really good polish.’

“And if we could kind of mold them together, and I think Mutt was looking for a band that was willing and able to be that band, and that was us. We were 15-16-17-18-year-old kids and got the opportunity to work with Mutt Lange.”

You can read further transcribed excerpts from the interview with Joe Elliott at Ultimate Guitar‘s website or listen to the interview below: