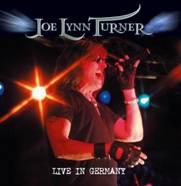 The tracklisting features some of the all-time classic songs that Joe has performed with RAINBOW and DEEP PURPLE, along with some of the newest classics of his solo repertoire. “Live in Germany” will include:
Death Alley Driver
I Surrender
Power
Street of Dreams
Power of Love
Can’t Let You Go
Jealous Lover
Your Love is Life
Blood Red Sky
Stone Cold
Can’t Happen Here
Spotlight Kid
Burn

“Live In Germany” portraits a killer show from a great artist, a testament of what was and a milestone for what is going to be!

JOE LYNN TURNER will also appear live in Germany as part of the Classic Rock Nights 2008 and will perform together with Jimi Jamison (ex Survivor) and Orleans.

In the meanwhile, the production team responsible for the first SUNSTORM album has started the pre-production work for the recording of the second cd. This time Joe Lynn has found in his vaults a few true Melodic Rock gems such as : Standing In The Fire, Forever Now, Save a Place in Your Heart, I Found Love and Walk On, while Jim Peterik (ex Survivor, Pride of Lions) offered these songs to the project: Say You Will, Tears On The Pages, Gutters of Gold. Completing the tracklisting will be 4 cuts written on purpose by Tom and James Martin (Khymera, House of Lords): The Spirit Inside; Don’t Give Up; House of Dreams, Divided. Musicians confirmed include Dennis Ward (Pink Cream 69) on bass and guitars, Uwe Reitenauer on guitars and Chris Schmidt on drums. Frontiers hopes to release the album in early 2009.