Joe Perry rushed to hospital after collapsing backstage after one song

Sad news to report as the legendary Aerosmith guitarist Joe Perry reportedly could not complete the first song played by the Hollywood Vampires as he collapsed backstage while performing at the Ford Amphitheater in Coney Island, New York, USA tonight before being rushed to a hospital. 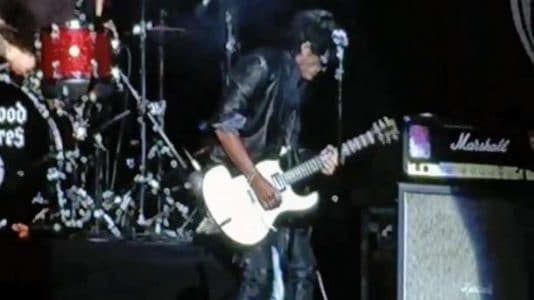 The NY Daily News has reported the following (with slight edit):

In an Instagram video posted by a fan, the Aerosmith rocker is seen onstage with fellow band members Johnny Depp and Alice Cooper when he appeared to become winded and had to sit down on the drum riser.

Perry, 65, then quickly stumbled backstage where he fell and was taken away by the paramedics.

According to AeroFANtic, a Facebook page created by Aerosmith fans, Perry had to be revived by medics on the scene and was rushed to Coney Island Hospital reportedly for cardiac arrest.”

The fan offered the following report including timeline:

“From a FANatic at tonight’s Vampires show:

Hey Chris, bit of odd news. I am at the Hollywood Vampires show at Coney Island, Joe came out for the start of the show, second song in, he disappeared, behind the amps and speakers there was confusion, NYPD, FDNY, it looked like Billie, it looks like they carried Joe off stage, I’ll let you know if they announce anything, weird.

More info as I hear it. Prayers it’s nothing serious…

Edit: 10:03pm: The only thing Alice Cooper just said was ‘if you notice one of our brothers is not onstage with us, he was very sick before the show’.. That’s all he said

Edit: 10:15: Joe Perry had to be revived by medics, rushed to Coney Island Hospital.

Edit10:30: Alice Cooper asks the Coney Island crowd to all cheer a “get well Joe” chant.