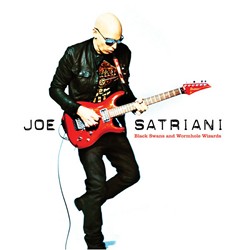 Black Swans And Wormhole Wizards will make its way to stores October 5, 2010 and is available for pre-order at www.sonymusicdigital.com/joe-satriani/details/5602126.

The first single, “Light Years Away,” will be released September 7 and tour dates in support of the record have already been announced. Satriani will kick off his world tour in Europe with the first date in Dublin. He’ll return stateside for the first North American leg of the tour playing Atlanta on December 1.

Black Swans and Wormhole Wizards is the first Satriani new studio record (he released a 2-CD live set from Paris in February) since his work with former Van Halen members Sammy Hagar and Michael Anthony and Red Hot Chili Pepper drummer Chad Smith in the rock group Chickenfoot. Their self-titled release drew mixed reviews but sold over 500,000 copies, which is a pretty solid number these days for a debut rock album even if the band is comprised by big name rock veterans.