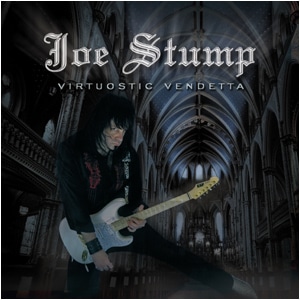 Joe Stump is one of the most intense and over the top guitarists on the planet. His maniacal guitar driven releases are amazing displays of power and jaw dropping technical command. He was named by Guitar One Magazine as one of the ten fastest shredders of all time and by Guitarist as one of the top 20 shredders of all time. The American guitar hero returns with his most diverse and complete solo effort to date with “Virtuostic Vendetta”. Not only a killer shred record but also a great all around guitar driven release, blending neo-classical speed metal, European influenced shred and old school hard rock into a great combination of playing and tracks that will appeal to a wide range of guitar enthusiasts and metal fans worldwide . Great melodies, killer riffs and from the heart emotionally drenched playing are combined with all the insane shredding you’d expect making this the most exciting record of Joe’s career. Proclaimed by many music experts as the ultimate guitar monster you’ll hear why words like Godlike, shred master, brilliant and many more have been used to describe the Shredlord’s unparalleled playing style.

On the album’s new material Joe comments, “On this record I kind of went back and re-introduced myself to myself. Two of my early albums “Guitar Dominance” and “Supersonic Shred Machine” were real favourites among my fans, and this new record is quite similar in that it’s fairly diverse with a cool mixture of tunes stylistically, but it all has my stamp on it. I’d like to think it’s my best overall effort as every aspect of this record is better than anything I’ve ever done, playing wise, guitar tones, compositions, production it’s all steps beyond any of my past releases . It’s also a very entertaining and listenable record considering there are no vocals”.

A strong Ritchie Blackmore vibe is prevalent on this release, indeed inspiring one track title “Blackmore’s Boogie” as well as an original ode to the Rainbow classic “Gates If Babylon” in “The Dance of Kashani”. To his credit Joe doesn’t shy away from hiding his influences, “I never claimed to be re-inventing the wheel. I just take the great influence of all my heroes Blackmore, Yngwie, Bach, Vivaldi, Gary Moore, Jimi Hendrix, Uli Jon Roth, Schenker, Paganini and try to craft my own thing with it. I love guitar and I always try to make records that guitar fans and hard rock/metal fans will love as well”. Yet there is more on offer than the neo-classical influence such as “Old School Throwdown” which is a nod to players such as Hendrix, Frank Marino and Robin Trower. Joe also throws down thanks to his influences with the use of subtle phrases from well known classics which the keen ear will spot in a few places.

“Virtuostic Vendetta” sees a guitarist in Joe Stump who survived the changed musical landscapes of the 1990’s with his career and reputation intact and sees Joe 16 years on from his debut album “Guitar Dominance” in the strongest shape yet.