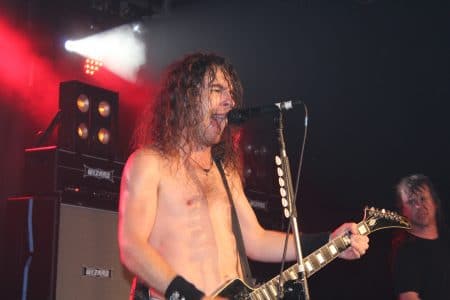 taking off very slowly. Like, we’ve gone everywhere, around and around; and everything gets a bit bigger, a bit bigger, each time when we do it. We’ve always, even when we started our band, we were sitting on the lounge room floor deciding what our band name would be when we were kids, like, we knew then that we didn’t want to be a band that went up too quick. We wanted to be a band that just rises, slowly rises.”

Airbourne‘s tour in support of Boneshaker was cut short due to the Covid pandemic back in March 2020. The Aussie rockers have only been on the road for a few weeks now playing festivals across Europe. In terms of whether the band members felt rusty after the long layoff, Joel O’Keeffe indicated: “Well, you ought to be perfectionists, and you make mistakes here and there and you go; “well, I won’t fuckin’ do that tomorrow night”! But it’s all going to come back. I mean, you turn the machine off for two years; turn a car on after two years and what do you think’s going to happen? There’s going to be oil leaks everywhere, and shit’s going to be breaking down, but that’s how it is.”

You can read the rest of the interview with Joel O’Keeffe and Ryan O’Keeffe via eonmusic‘s website.

Airbourne‘s “Live It Up” video (from Black Dog Barking album):