Warrant guitarist Joey Allen was recently interviewed by Chuck Shute for the The Chuck Shute Podcast. 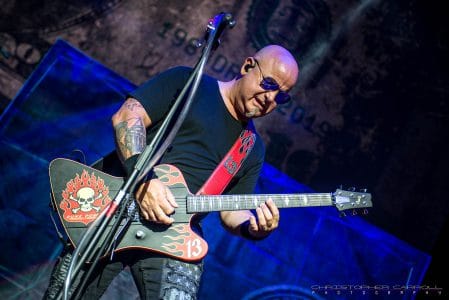 Warrant‘s last studio album Louder Harder Faster was released back in May 2017 and finished at #3 on the Sleaze Roxx Readers’ Top 20 Albums of 2017.

In terms of whether there are any plans for Warrant to do a new album, Allen indicated (as provided by the The Chuck Shute Podcast with slight edits): “You know, when this whole pandemic started, some guys said, ‘Why don’t we do something live on the internet. Why don’t we just do that?’ And that was squats. Everybody’s like, ‘Why don’t we just go away for a while? You know, we’ve been touring for so long. Yeah. And let’s just go away.’ So that was the consensus. And then I think about six months into the pandemic, we had a meeting. And I said, ‘Hey, is anybody interested in starting to write for a new record?’ And it was like, ‘Nope.’ Now. All right, so now, I don’t know what Eric‘s [Turner] done. I don’t know what Jerry‘s [Dixon] done. I don’t know what Robert‘s [Mason] done. I know Robert did a The End Machine record, right with George [Lynch] and Jeff [Pilson], which is great. So I would imagine we’ve probably got one left in us. But we’ll see. I mean, there’s no immediate plans for that. Right now, the immediate plans are to get the band back out on the road. I think in June, we’re going to be doing that this year. So we’re fired up.”

You can listen to the interview with Joey Allen on the The Chuck Shute Podcast below: