Former Sweet Savage singer Joey C. Jones was interviewed by Hall Laurel for the book Soundtrack of Our Youth: History of Hair Metal Music, which was recently released and is available in Kindle and paperback formats.

Jones was asked how Guns N’ Roses frontman Axl Rose was back during the days of the Sunset Strip. Jones replied:

“He’s always been a terrible live singer. Before GnR, he was in Hollywood Rose. I caught a few shows, and left early, like most of the crowd. It was the A&R guy at Geffen that loved those guys so much. They were not as big on the Strip as Poison and Warrant. They got signed pretty quick, so they didn’t have to hand out flyers or crap like that. 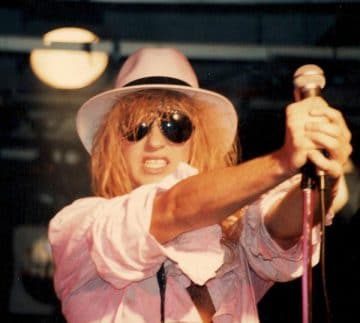 Axl tried to get into the dressing room at the Whisky after a Sweet Savage show and I told my brother (our security guy) not to let him in.”

In terms of his time with Poison guitarist C.C. DeVille, Jones stated (with slight edits): “After the MTV Video Awards in 1991, when Poison train wrecked “Unskinny Bop”, CC called me at 2:00 AM and said he’d leave Poison if I did a band with him. I told him I’d show up at his house to write songs.

Our original lineup was legendary drummer Carmine Appice, Deep Purple/Dio bassist Jimmy Bain, CC, and myself. CC didn’t have any songs written, so those guys learned some of my stuff. Unfortunately, CC and I were not at our best in those days, so Carmine and Jimmy left. CC grabbed Adam Hamilton and Chris Torok.

It was hard to concentrate on songwriting and rehearsing, because it was a nonstop party at that house. People passed out everywhere, and every sex, drug, and rock ‘n’ roll cliche imaginable. Sam Kinison was going through a divorce at that time. Sam lived close to CC, so to avoid going to jail, he just stayed at CC‘s for weeks on end.

Sam was always in character. His energy was amazing. Of course, it was aided by all the drugs that was going on. I used to have Sam call my friends all over the country at 3 or 4 AM and just tear them apart. My friends are still bragging about being shredded by Sam. Sam was a misunderstood guy. He was caught up in his own glory. He actually cried on my shoulder a couple times when everyone had passed out but him and I. I love him and miss him very much, and was lucky to know him. My comedy actually cracked him up constantly! God bless you, Sam.”