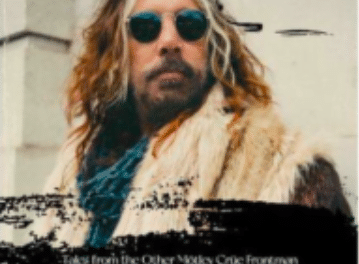 Former Mötley Crüe and The Dead Daisies frontman John Corabi will be releasing his long-awaited autobiography Horseshoes And Hand Grenades via Rare Bird on or about June 14, 2022. 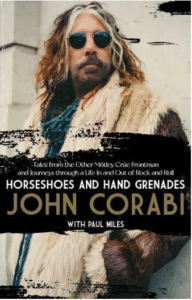 You can pre-order Corabi‘s signed autobiography (along with co-author Paul Miles) via Rare Bird Lit‘s website, which indicates:

“In Horseshoes and Hand Grenades, John Corabi recounts his life from the mean streets of Philadelphia to the Sunset Strip. Take a look behind the scenes at Corabi’s time fronting Mötley Crüe, Union, and The Dead Daisies, as well as his time playing rhythm guitar with Ratt and even his stint as a long-haul trucker. Whether it’s detailing his parents difficult divorce, his family’s dark history of abuse, his run-in with a serial killer, or simply the best way to arrive at a wedding—which maybe is by helicopter and maybe it isn’t—he pulls no punches and outlines the good and bad of it all in this raucous autobiography.”

“American hard rock singer-guitarist-songwriter-raconteur John Corabi has entertained audiences with his powerful bluesy vocals for over years. Hailing from Philadelphia, Corabi relocated to Hollywood’s Sunset Strip and landed his first record deal with The Scream. He soon after joined Mötley Crüe, and he fronted them for the next five years. He later put together Union with ousted Kiss guitarist Bruce Kulick, before stepping in to play rhythm guitar with Ratt for the better part of a decade. Corabi also fronted the supergroup The Dead Daisies, performing on the planet’s biggest festival stages. He currently lives in Nashville with his wife, Debbie, and their two dogs, Sophie and Bandit.

Paul Miles is the historian of one of rock’s most reckless and biggest-selling bands of all time: Mötley Crüe. Having continuously documented the facts behind their sex, drugs, and rock-and-roll lifestyle for decades via his Chronological Crue website and book series, he was asked to contribute to the band’s best-selling autobiography The Dirt in 2001. His titillating confessional Sex Tips from Rock Stars was published worldwide in 2010, and his photography collection Before I Hit the Stage: Backstage Rock’n’Roll Moments in New York City was released in 2015. He currently lives in Melbourne, Australia.”