Father time catches up to everyone and it appears that perhaps this is the case for Mötley Crüe‘s long-time guitarist Mick Mars who is currently 71 years old and suffering from the medical condition “ankylosing spondylitis”. 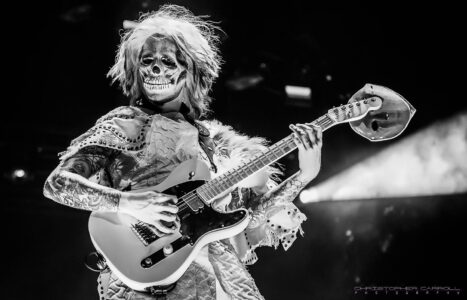 Last month, Mötley Crüe completed their very successful The Stadium Tour across North America along with Def Leppard, Poison, Joan Jett & The Blackhearts and Classless Act. Singer Vince Neil revealed to the Las Vegas Review-Journal that Mötley Crüe are planning to tour with Def Leppard in Mexico, South America and Europe in 2023 and in America in 2024.

“Metal Sludge have been tipped off from a few in the industry that John 5 is strongly being considered and just might be the guy you will see playing guitar for Motley Crue at some point in the future.

Ironically a new article just hit Blabbermouth today (Oct. 7th 2022) that notes John 5 may no longer be a member of the Rob Zombie band.

Blabbermouth writes: “According to Rock Feed, John 5 and Rob Zombie “no longer follow each other on social media,” lending credence to the theory that John 5 is no longer a member of Rob‘s band.”

There is no confirmation of this from Motley Crue, John 5 or any other camp, but we’ll be keeping our ear to ground and will keep you informed.”