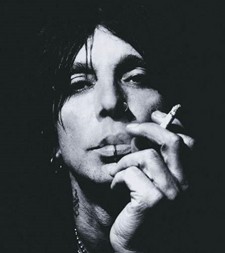 John Corabi, best known for his work with The Scream, Union, Brides Of Destruction and as Vince Neil’s replacement in Motley Crue, is putting the final touches on an acoustic album.

The singer/guitarist said on facebook, “Finishing up my acoustic record this week. Old songs, new songs, and just a sample of things to come… Special thanx to Chris Henderson (3 Doors Down) and Chet at Rivergate studios for helping with this new acoustic record.”

Corabi also revealed he would be touring this summer ‘acoustically solo’ with Cinderella, who just announced that VIP packages for their summer tour are avaialable at www.rightrockclothingco.com.

John Corabi first came to our attention when he arrived on the L.A. scene with a band called Angora in the late eighties. The band quickly garnered the attention of local club goers, music fans, and L.A. radio. The band won several awards including “Best New Club Act”. Next, John formed the band The Scream in 1990. The band members included former members of Racer X and Shark Island. This talented lineup of musicians made Hollywood Records offer them a record deal without ever doing a gig!! The debut album “Let It Scream” was produced by the legendary Eddie Kramer, of Jimi Hendrix, Kiss, and Led Zeppelin fame. The album had a meteoric spike in popularity upon its release with the hit songs “Man In The Moon”, “I Believe In Me”, and the reflective “Father, Mother, Son,” prompting MTV videos for all three songs and an array of loyal fans. The Scream toured for a year promoting the album, and many other songs from the recording found new life on the stage, including “I Don’t Care”, “Outlaw”, and “Catch Me If You Can,” a hard hitting crowd favorite. John had caused such a stir with the material he had written with the Scream that Motley Crue’s Nikki Sixx took a serious liking to him. It turned out that the Crue was looking for a new singer and they wanted John.

After several singing and song writing sessions, it didn’t take long for Motley Crue to realize John Corabi was the musician they needed to transform their image and take them to the next level. The resulting album was arguably the best recording the band had ever produced. Confident in their new sound and new image that John provided them, they decided to simply name the album “Motley Crue”. The new Motley sound had evolved into what critics say was an album “way before its time” and produced a daring musical depth inspired by the band’s new collaboration with John. His contribution to the music and lyrics produced dark and powerful, melodic songs like “Hooligan’s Holiday”, “Misunderstood”, “Smoke The Sky”, and “Power To The Music.” The album went platinum in the States, and enjoyed even bigger success around the world. The sound of the new Motley Crue was unprecedented in rock n roll. It gave us a glimpse of what bands like Godsmack, Creed, and Nickleback would usher in as “New Metal” almost seven years later. Surprisingly, after a respectable tour of the States, the band went back into the studio to begin writing a second album, which would never see a release. Even though Motley enjoyed international success and fame, they were still at the mercy of the capricious music industry which was struggling with the shift from the musical sound of the 80’s that Motley helped pioneer and the recent explosion of the Seattle music scene, leaving the new Motley Crue album with John to fall between the cracks. The band was under a lot of pressure from the record label to retreat to an already branded version of Motley Crue with Vince Neal, and decided to regroup with their former lead singer one year into the production of the new album with John.

John was not about to give up though, and soon partnered with renowned Kiss guitarist, Bruce Kulick to release a self-titled debut from their new band, “Union” which gained instant popularity with the trend-setting college and rock radio stations. Union won the Metal Edge Magazine’s Reader’s Poll for best new band of 1998 for songs like “Old Man Wise”, “Love I Don’t Need It Anymore”, and “October Morning Wind.” The poll gave a raving review for the Union favorite, “October Morning Wind” claiming that it was the song that Led Zeppelin never got to release. Union soon delivered “Live In The Galaxy”, a live album featuring many of the songs from the first record, a live version of songs from John and Bruce’s repertoire, and covers of Cheap Trick’s “Surrender” and the Beatles’ “You’ve Got To Hide Your Love Away.” The live album was soon followed by “The Blue Room,” an album that showed the progression in their song writing. The band hit the road again, and found that many clubs were selling out Union shows. Songs like “Do Your Own Thing”, “Hypnotized”, “Dead”, and “Who Do You Think You Are?” quickly became crowd favorites and onstage regulars. Union had a short-lived success but great musical synergy and remains a cult favorite to rock music fans today. Union took a hiatus in 2003 when the band members decided to explore new creative possibilities on their own.

John Corabi joined Ratt as their rhythm guitarist in 2001, and did several tours with them through August of 2008. John also worked with the Eric Singer Project during this time. As he proceeds with his solo career, John is incredibly excited to get started again, and to show the fans and the world that much greater things are soon to come…