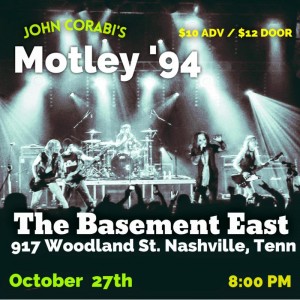 John Corabi is scheduled to play a gig at The Basement East in Nashville, Tennessee on October 27, 2015, which is part of Corabi‘s successful Motley ’94 tour and where the former Motley Crue frontman and his band play the entire Motley Crue album. The Nashville show will reportedly be filmed and recorded for a CD/DVD release with no date yet for the release.

Earlier this year, Sleaze Roxx attended Corabi‘s Toronto, Canada stop of his Motley ’94 tour and had the following to say in its review: “By the time Corabi and his four younger bandmates hit the stage, it felt like the Rockpile West was jammed packed with people and a sense of excitement was in the air. Corabi hit the stage with “Power To The Music”, and right away it was evident that both his voice and his band sounded really good!” Sleaze Roxx went on to conclude: “I definitely obtained a new appreciation for the Motley Crue record, and for John Corabi as an entertainer and performer. If you get the chance to see Corabi deliver his ’94 Motley experience, don’t miss it!”

John Corabi singing the entire 1994 Motley Crue Album. Filmed 11/22/14 in Cudahy, WI at the Metal Grill.Not the HD version because it was SOOOO big.Thanks t…