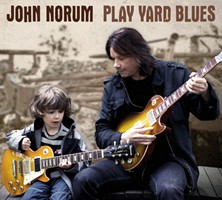 Europe guitarist John Norum will release his long awaited new solo album ‘Play Yard Blues’ on May 17th through Mascot Records. The CD is a fantastic collection of John Norum originals as well as a couple of covers and can be pre-ordered at www.mascotrecords.com. The CD will also be released in Japan with a bonus track at a later date.

The difference with previous solo CDs is that ‘Play Yard Blues’ shows a little different side of John Norum. The trademark sound and riffings are definitely there, but John also follows a more bluesy approach in several songs. With the success of the recent Europe album, this album will find it’s way to his already massive fanbase as well as to an audience of say Frank Marino. ‘Play Yard Blues’ is a great album with some spectacular playing from one of the best.

Musicians on the new album are Tomas Torberg (bass), Thomas Broman (drums) and Peer Stappe (oercussion), with special guests Leif Sundin (vocals on Born Again and Got My Eyes On You) as well as Mic Michaeli on keyboards.