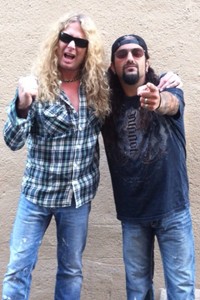 Former Whitesnake and Thin Lizzy guitarist John Sykes is teaming up with ex-Dream Theater drummer Mike Portnoy in a brand new band. Along with a currently unnamed bass player, the trio have demo-ed 12 songs for the new project and will begin recording in the Fall. News of the new collaboration was revealed at a recent taping of That Metal Show.

With few details surfacing, Mike Portnoy decided to clear up some things with a posting on his official forum. “Yes, this is what I’ve been working on here in LA for the last week or so (as well as a few days at the end of May)” said the drummer, “John & I have been working with a bass player as well (no, not Dug Pinnick) and the announcement of who it is will be made at a later point… let’s just say it is a completely ridiculous modern-day power trio!!!”

“We’ve demo-ed 12 songs so far and will begin recording the album in the Fall” continued the drummer, “Eddie (Trunk) did NOT spill any beans on me… the plan all along was to announce this on THAT METAL SHOW and make no mistake about it, this announcement was THEIR exclusive to announce regardless of whoever is now reporting it. For the record, this is a new “real BAND” for me, and Adrenaline Mob is also a new “real BAND” for me. I will divide my time as best as I can between the two (hey, if Corey Taylor & Jim Root, Mike Patton, Joe Satriani & Chad Smith, Zakk Wylde all can do it, so can I!) and I am equally excited by both… as they are both amazing new bands, but VERY different worlds musically… so there’s really no clash creatively. Timing wise, Adrenaline Mob is happening NOW… and my band with Sykes wont be released (until) later next year… so they’ll be able to co-exist just fine!”