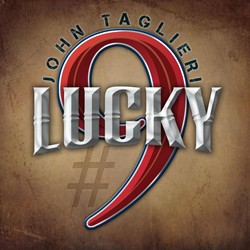 Over the course of the past decade, singer/songwriter John Taglieri has made a name for himself in AOR, Americana and modern rock circles. Striking again with his ninth release, ‘Lucky #9’, Taglieri has upped the stakes dramatically with this six song EP, from the driving chorus of opening track and first single “Losing Me” to the mid-tempo power balladry of “Without You” straight through to the acoustic driven closer “Not Gonna Be My Life.”

Co-produced by Lee J. Turner (Darius Rucker, Jewel, Leann Rimes, Bo Bice, etc), who also handles all the keyboards on the release, this is the first release coming out of Taglieri’s new Dawg Pound Studios. Aside from the keyboard parts, John once again performed every instrument on the release. Writing both alone and with co-writers in Nashville and New Jersey, the EP is full of modern rock tinged with modern country flavor. Written from the heart, the songs speak of everyday life. The songs show a new growth and maturity in both their writing and in Taglieri’s production skills.

“I approached this EP a little differently,” says John. “Being my ninth release, I think I am more in tune with what I wanted to say as an artist. I wrote songs that really meant a lot to me right now in life and tried to tell stories that would connect. Using my new studio and working with Lee again was awesome as well. There was a great vibe throughout the whole recording process. I’m very proud of ‘Lucky #9’, and I hope people enjoy it.”

‘Lucky #9’ will be released on April 17th through Leap Dog Music in digital format only and will be found on all of your favourite websites including iTunes, eMusic, AOL and more. More information on John Taglieri can be found at johntaglieri.com and www.facebook.com/JohnTaglieriMusic.