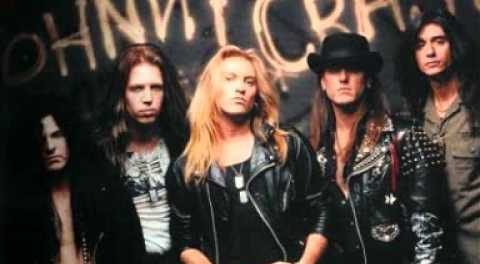 Johnny Crash are back and need your help via their Kickstarter campaign to generate funds to shoot a video of the group’s comeback show. 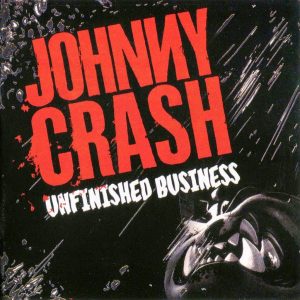 For the uninitiated, Sleaze Roxx‘s review of Johnny Crash‘s album Unfinished Business will provide some quick and dirty background on who this band is. Sleaze Roxx stated in its review of Unfinished Business: “All I can say about this CD is…it’s about fucking time! For over fifteen years these recordings have been collecting dust in some lame record company’s vault as the ‘suite and tie guys’ began signing boredom inducing bands to major contracts in the early 90s. Whoever was behind the shelving of Unfinished Business should be brought before a jury of headbangers and tried for crimes against humanity – as the band states, “there’s no parole for rock ‘n’ roll.”

Everyone who reads Sleaze Roxx should know by now who Johnny Crash is, but for those of you who may have missed out I’ll bring you up to date. The band was formed by a handful of Sunset Strip misfits and a European singer who had tasted success with Tokyo Blade. Together they released 1990’s underrated classic Neighborhood Threat, a flawless collection of AC/DC inspired rock. From there things began to unravel and the recordings represented on this disc are what the band was able to produce before the straw broke the camel’s back.”

Vick Wright lead singer of Johnny Crash is on a quest to shoot a music video of the newly reformed band live on stage in Hollywood. 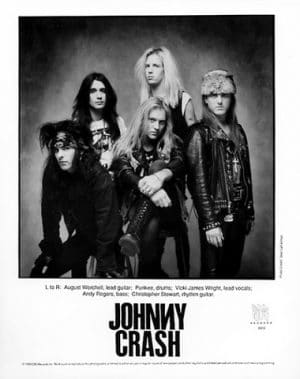 “It’s been 30 years since I first set foot on stage with JOHNNY CRASH. Over half a lifetime ago. A band born out of the “Sunset Strip Music Scene” of the 1980’s. A fantastic time in music history. Seriously, you had to be there to feel the great energy and creative spirit of this extraordinary period in time. Featuring exciting new bands such as Motley Crue, Guns N’ Roses, LA Guns, Poison, Warrant, Love/Hate, Rhino Bucket and many, many more. JOHNNY CRASH was one of the bands that was part of the post-glam rock movement and pre-grunge era. We went from playing the Whiskey A-Go-Go and the Cathouse to playing 3000 seat theaters with BONHAM and ultimately paying in arenas opening for MOTLEY CRUE on the Dr. Feelgood Tour. In retrospect for me this was a wonderful time in my life. We were on top of the world. We had our first album “Neighbourhood Threat” under our belts, with our label Epic/WTG Records seemingly behind us as we toured the world doing what we loved to do. It seemed as if nothing could stop us.

After the MOTLEY CRUE tour it was onward and upwards. We went to Nashville to record our second album. The record was much more of a progressive opus compared to “Neighbourhood Threat.” It still had the sleaze-rock swagger, but it also had a bluesier feel to it, with the addition of slide guitars, courtesy of our new lead guitarist, JJ Bolt and dynamic percussion supplied by drummer, Matt Sorum (The Cult, Guns N’ Roses, Velvet Revolver) along with piano and organ by long-time friend, Dizzy Reed (Guns N’ Roses) and blues Harmonica and Jews harp played by myself all added to this raw but devilishly bluesy album. A definitive departure from what critics had suggested the year before that “Johnny Crash is nothing more than another AC/DC clone band with nothing new to say.”

As time has now told, we might have had our roots in simple 3 or 4 chord rock like AC/DC or ROSE TATTOO, but we were very original in our own way. You the fans knew the truth! You knew that we had something special, something that echoed what people were feeling on the streets at that time in Hollywood. Then one day, when I was in London on vacation after “Unfinished Business” was finally completed I received a phone call. My heart sank as I was told that my best friend and bass player, Andy Rogers had died of a heroin overdose. We were devastated by the loss of him. But after thinking about what we had accomplished in such a short time and anticipating that Andy would indeed have wanted us to carry on without him, we decided to do so. Unfortunately, the damage was done. Epic had recently hired a new president who did not see our vision or potential, thus deciding to drop JOHNNY CRASH from the label. Once we lost the deal, the band carried on for a few months as we looked for a new record company who might potentially release “Unfinished Business.” 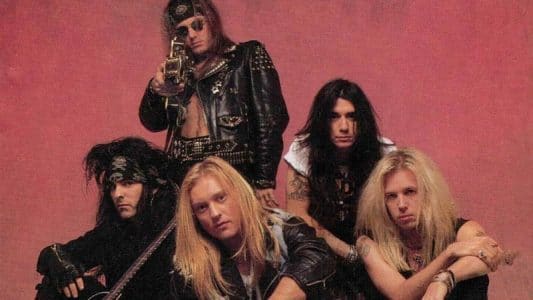 Unfortunately, by this time Nirvana had taken the music industry by storm, leaving many bands in their dust. Johnny Crash found it hard to carry on. Grunge had arrived and the music business was changed forever. We were collateral damage in an industry that was about to be turned upside down by Napster and digital music piracy. In the wake of all this I formed a band called THE REAL McCOYS and continued on for a year or so. We even recorded demos with the late, great producer and personal friend ANDY JOHNS. Once rap music took over mainstream radio, it seemed as if nobody was interested in Rock Music anymore. This brings us to today. Things are finally beginning to turn around for Rock ‘n’ Roll. We see many of the old bands coming back, just as strong as they ever were, GUNS N’ ROSES, POISON, LA GUNS… even MOTLEY CRUE kept the candle burning and thrived over the last few tours, culminating in their final tour earlier this year. New bands are rising up such as AIRBOURNE, BLACK STONE CHERRY, RIVAL SONS along with many more who promise to keep the Rock n’ Roll fires burning for decades to come. I want to be involved once again in this great movement we call “Rock n’ Roll”…at least while I am still young enough to do what I always loved to do.

As many of you know I am a filmmaker, I write, direct and produce. I made an award winning short film entitled “WHITE TRASH NOIR” back in 2012 which helped me raise money for my most recent feature film entitled “TO HELL WITH A BULLET.” Which is now available via Pay-Per-View on cable TV or via DVD and Blu-ray. However, as much as I love my new profession I do miss playing music. I recently have come to the conclusion that if enough people are interested in seeing me perform again, then that is what I will promise to do. My plan is to re-from JOHNNY CRASH and play all the classic songs from our two studio albums. If there are enough people out there that can help me in my dream of playing live again from Hollywood to Europe to South America and Asia, then I will re-form the band, rehearse the songs and put the most kick-ass show together that you have ever seen.

This time, with your help I want things to be different. I feel like we can accomplish something really incredible that we didn’t quite accomplish before. I want to harness social media along with all the friends, fans and families support and get the word out that JOHNNY CRASH has returned and is better than ever! I know we can do this. There isn’t a day that goes by where someone asks me “when are you going to get up on stage again?” I believe now is the time. This is why I have decided to come to all of you, instead of going to a major label, management company, or publicist first. I hope you’ll join in and support my quest to once again play some kick-ass rock n’ roll for you all. That’s why I am asking everyone to get on board and help me return JOHNNY CRASH to a stage near you! 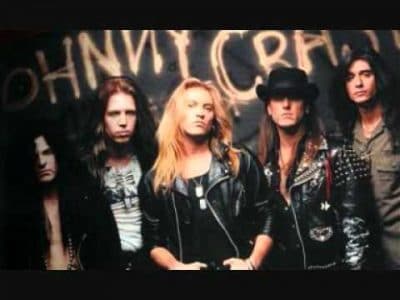 If we can produce this film/video of the “Return of Johnny Crash” together, then I am sure that enough buzz will be created so we can tour again and keep Rockin’ for years to come!

We can do this! But only if we do this together.

Much love to you all,

Once we reach our funding goal I will use the money to put the band back together with as many original members as possible. Your investment will be used for rehearsal time, film crew, plus equipment, as well as expenses incurred from building the Johnny Crash website and creating new JC merchandise (T-Shirts, etc). Once the above things have been achieved we will then pick a venue in Hollywood (Los Angeles) and film our reunion show. I will then edit and produce with my filmmaking team a short film of the show. I will enter the film into film festivals as well as use it to gain interest from all my connections in the music business, such as theatrical agents, PR companies, record companies… letting them know that JOHNNY CRASH is back and stronger than ever. This will happen simultaneously with a social media campaign, I am fully prepared to see this new JC chapter through. My voice is in great form and I am still in good physical shape. Everything is lined up and I am ready to make this new venture a reality. All we need is your support. Thank you for getting involved and spreading the word. I can’t wait to get on stage and rock the hell out of you!”