Sleaze Roxx will be hosting the world premiere of Johnny O’Neil‘s video for his solo single “Comin’ For You” from his debut solo album Truth Or Dare on Wednesday, May 12, 2021 at 7:30 am EDT. Sleaze Roxx will also unveiling Part 1 of its comprehensive interview with the Dare Force frontman at that time. O’Neil has now released a third teaser for the upcoming video.

Johnny O’Neil‘s Video Commercial #3 for “Comin’ For You”:

Johnny O’Neil‘s Video Commercial #2 for “Comin’ For You”:

Johnny O’Neil‘s Video Commercial #1 for “Comin’ For You”:

O’Neil‘s EPK on his website about his debut solo album Truth Or Dare indicates in part: 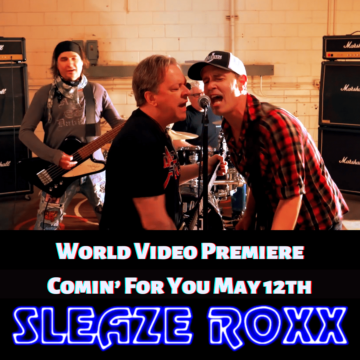 One of the most wonderful aspects of this project was Johnny‘s collaboration with Dare Force co-founder and childhood friend Brian Bart, who engineered, recorded, mixed, mastered, and co-produced the album with Johnny. Besides writing all but one of the tunes on the album, O’Neil sings all lead vocals and plays all guitars (lead, slide, acoustic, and bass).

Johnny enlisted his “secret weapon,” percussion powerhouse Joachim (Jo) Baecker on drums. Jo played drums in Rattlin’ Bones and Funhouse with former members of Obsession and Flipp, and has worked in the studio with the legendary producer Jack Douglas, and the late, great Mick Ronson, former guitarist for David Bowie.

Johnny and Jo also enlisted a very special guest artist, Danny Peyronel, the original keyboardist for UFO, who contributed his out-of-this-world keyboard skills to three of the tracks.”