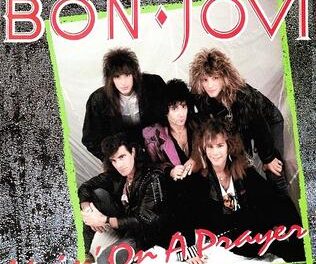 Bon Jovi frontman Jon Bon Jovi was recently interviewed by The Irish Times and asked about his band’s number one hit single “Livin’ On A Prayer” from 1986’s multi-platinum seller Slippery When Wet. The singer stated: 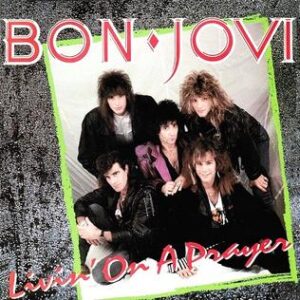 “That song, God bless it. But, my God, who knew? Not us, I can assure you. It was created on a day when none of us had any ideas. We just had a conversation, and it came out of that. I’m sure happy my name’s on it!”

In terms of whether he thought that “Livin’ On A Prayer”, which he co-wrote with guitarist Richie Sambora and hit songwriter Desmond Child, would be a hit, the singer stated: “Not at all. I remember walking out of the room with Richie and I said, ‘Eh, it’s okay. Maybe we should just put it on a movie soundtrack.’ Richie looked at me and said, ‘You’re an idiot. It’s really good.’ I said, ‘I just don’t know where it’s going.’ But it didn’t have that boom-boom-boom bassline yet, so it sounded more like The Clash.”

Wikipedia states the following about “Livin’ On A Prayer” (with slight edits): “”Livin’ on a Prayer” is a song by the American rock band Bon Jovi, and is the band’s second chart-topping single from their third album Slippery When Wet. Written by Jon Bon Jovi, Richie Sambora and Desmond Child, the single, released in late 1986, was well received at both rock and pop radio and its music video was given heavy rotation at MTV, giving the band their first No. 1 on the Billboard Mainstream Rock chart and their second consecutive No. 1 Billboard Hot 100 hit.

“Livin’ On A Prayer” is the band’s signature song, topping fan-voted lists and re-charting around the world decades after its release. The original 45-RPM single release sold 800,000 copies in the United States, and in 2013 was certified triple platinum for over 3 million digital downloads. The official music video has over 680 million views on YouTube as of June 2020.”