Bon Jovi frontman Jon Bon Jovi and Prince Harry teamed up a few days ago to record a special version of the song “Unbroken” at Abbey Road Studios in London, UK for the upcoming Invictus Games.

The following message was posted in part on Bon Jovi‘s Facebook page yesterday: 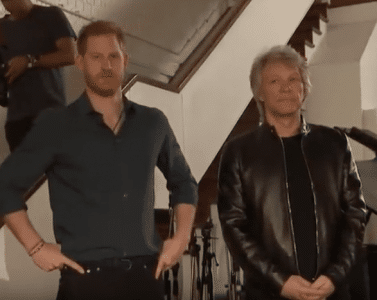 “JBJ & Harry got together to record a special version of #Unbroken for the Invictus Games. The new recording features the Invictus Games Choir, made up of wounded, injured, and sick veterans and serving personnel of the UK Armed Forces.”

Wikipedia states the following about the Invictus Games (with slight edits):

‘The Invictus Games is an international adaptive multi-sport event, created by Prince Harry, Duke of Sussex, in which wounded, injured or sick armed services personnel and their associated veterans take part in nine sports including wheelchair basketball, sitting volleyball, and indoor rowing. Named after Invictus, Latin for “unconquered” or “undefeated”, the event was inspired by the Warrior Games, a similar event held in the United States.

The second games opened on 8 May 2016 at the ESPN Wide World of Sports Complex at Walt Disney World, near Orlando, Florida, United States. The opening ceremony was attended by Prince Harry, First Lady of the United States Michelle Obama, former U.S. President George W. Bush and many other dignitaries. U.S. President Barack Obama and Queen Elizabeth II helped make a promotional video for the 2016 event.

The third games were held in September 2017 in Toronto, Ontario, Canada, where Prince Harry made one of his first high-profile public appearances with Meghan Markle, whom he later married. The 2018 games were held in Sydney, New South Wales, Australia and attended by both Prince Harry and his wife, Meghan, Duchess of Sussex. The 2020 games are scheduled to be held in The Hague, Netherlands in May.”