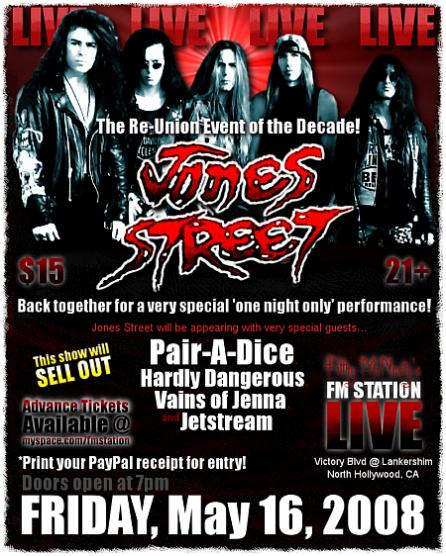 It’s kind of a big deal when one of those ‘where are they now’ bands pops up for a reunion show. In the case of Jones Street, it’s an even bigger deal.

If you happen to have been around the Hollywood scene back in the late 80’s and early 90’s the name Jones Street was on every pure bred rocker’s lips. These bad boys were the poster children for everything rock city stood for. They could drink more booze than just about anyone else in the room, probably slept with most of our girlfriends, or were going to, didn’t give a damn about following the rules, and delivered an astonishing performance every time they took the stage, which in those days of Hollywood ‘big’ rock was pretty often. Jones Street was a hot ticket.

The thing is, Jones Street never ventured very far from the safe haven of Hollywood stages, so if you were a kid in Oklahoma or Idaho, you probably never heard of them. But for those of us who haunted the Sunset Strip every night, a Jones Street show was the cat’s meow. And why not? You knew everyone, who was anyone, would be there. It just wasn’t possible to go see the Jones boys and not run into at least one of the members of Motley Crue, Poison, Warrant, Ratt or maybe Guns N’ Roses or L.A. Guns, or one of those ‘guns’ bands. Jones Street shows were were the party was. Period.

When the Seattle scene erupted, the hair bands of Hollywood kind of dried up. Sadly, Jones Street was a day late and a few bucks short. Kurt Cobain and all his friends from up north were preaching ‘minimalist’ as their mantra, and American kids were singing right along. The glory days of rock suddenly ended, and with the passing of that era, Jones Street went M.I.A. No one knew where they went, we just knew they were gone, and with them, the party, the fun and some of the best rock songs ever written. Best hair too!

But this sad story has a silver lining. Jones Street has just announced a reunion performance at FM Station on Friday, May 16, 2008. It’s billed as a ‘one time only’ but we’ve heard rumors circulating around the schoolyard that the band is seriously considering tour offers from some of their strip club crone’s. If this is true then there must truly be a God in Rock N’ Roll heaven.

Regardless of future shows or tours, you can be sure a Jones Street Reunion in LA will sell out, so get yourself over to www.myspace.com/fmstation and order your tickets now, or you’ll miss this chance to take a trip back in time, and into Hollywood history. Do you suppose some of those ‘names you know’ will be there too? At a Jones Street show? That’s a safe bet! So the party’s on boys and girls. Drag out that tight leather and leopard skin kiddies, there’s gonna be a rock show!