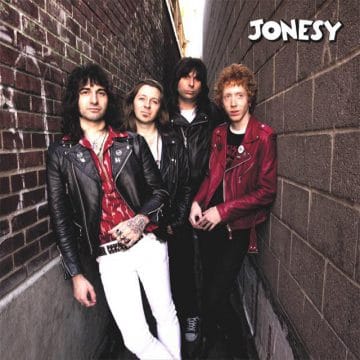 Canadian rockers Jonesy have unveiled their video for their new single titled “Record Store Day (Is For Losers).”

Jonesy released their self-titled debut album on vinyl via Dead Beat Records back in January 2018.

The following message was posted in part on Jonesy‘s Facebook page yesterday:

“We only have despise for that ludicrous hypocritical farce that is record store day. Very few records store don’t play that sell out game, and most of them survived the 90’s and early 00’s because of people who don’t even shop on that day. So don’t start us on the “well, it use to be a good thing at first, blah blah blah…”; who gives a fuck about what it was the first year 12 years ago. I banged your mom 12 years ago, that doesn’t make me your daddy and I don’t spend thanksgiving with you every year dumbass. We wouldn’t care if it wasn’t for the consequences of the thing: big delays for music that actually matters in pressing plants(no your expensive U2 repress don’t matter), and ridiculous prices on both records and press orders. Not to mention all the idiots who are after pricey collectables instead of music. Real VHS music video.”