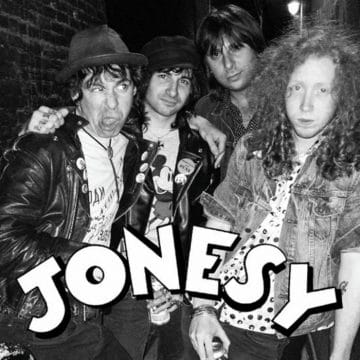 Speaking exclusively to Sleaze Roxx, Jonesy‘s Chilly Vinny was asked how and when did Jonesy get together and come up with the band name, to which Vinny replied: “The band really came together in February 2015 at a Biters show in Montreal, or maybe it was in a swingers’ club. All I can remember is that there was a lot of sex involved. We already had the idea of forming a band with ex-Cheap Thrills guitarist Nick Chasse based on the fact that David Bowie‘s “Suffragette City” and UFO‘s “Doctor Doctor” were two of the most ultimate rock n’ roll songs. That night, we met ex-Dagger Eyes drummer Suspicious Dave and it really started then. Since last year, Bruno the Maniac, who also plays in the glam metal band Rusted. joined the orgy and plays guitar too. We chose the name Jonesy because of Steve Jones of the Sex Pistols — the best fucking band ever. Jonesy is also slang for ‘good in bed’, which fits the band perfectly as we sing a lot about girls, and as we have humongous penises.”

When asked whether it was a conscious decisions to go with song lyrics that are pretty provocative and juvenile in some ways, Vinny advised, “When we started, I thought ‘Let’s play some very simple punk rock influenced by GG Allin and let’s piss off that really PC punk scene that think Henry Rollins is awesome.’ The punk scene has became so sensitive, political and so ‘nice’ in a boring way. The hard rock and metal crowd is way more chill and fun except when they listen to all that modern shit. Punk is supposed to be provocative. We miss dangerous bands like the Sex Pistols, Dead Boys and Guns N’ Roses. After a few rehearsals, we decided to go with a more elaborated sound with a more glam and hard rock touch, keeping the punk sound of the mid ’70s and the dumb provocative words. The sex theme came naturally, as sex, drugs and rock n’ roll was our daily bread at the time. After a few STDs and overdoses, we decided to calm down a little, but we still got it baby! You’ll see about that backstage lady. Think of us as an X-rated cartoon kind of band, because we mainly do that for fun — beside the sex of course.”

In terms of what’s next for Jonesy, Vinny advised, “We’ll be recording an album next June and hopefully put out a second 7″ before that. Playing, pissing off people, having a reversed gang bang and playing even more.”