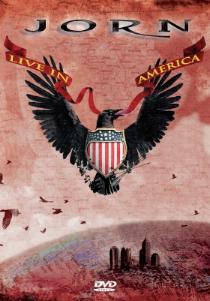 Frontiers Records is pleased to announce the release of the long awaited JORN DVD “Live In America” on January 23rd 2009.

“Live in America” was recorded live during JORN’s first ever concert in the USA, at the ProgPower VII Festival in Atlanta, where he performed as headliner of the day on September 16th 2006. The incredible set saw Jorn offer a wide selection of songs taken from his solo albums, collaborations and a mindblowing Whitesnake medley, who made him one of the most successful acts ever in the history of the festival.

Jorn Lande is one of nowadays vocal Rock gods: he has a vocal capability that is world class, distinctive, rich and spanning a large range. He cut his teeth with such internationally renowned acts as: MASTERPLAN, ARK, MILLENIUM, VAGABOND, THE SNAKES and many more. He has also established himself with his own band under the name “JORN”, releasing so far seven increasingly successful solo albums. “Live In America” is a visual testament to Jorn’s capabilities as an entertainer and to the incredible power and strength of his now legendary shows and a perfect complement of the CD release which came out in September 2007.

DVD Contents:
Jorn Live at ProgPower VII Festival:
We Brought The Angels Down
Blacksong
Duke of Love
Are You Ready
Cold Sweat
Drum Solo
Out To Every Nation: Guitar Solo
Straight Through The Heart
Godless And Wicked; Soulburn
Devilbird
Perfect Strangers
Gonna Find The Sun
The Whitesnake Medley: Come on/Sweet Talker/Crying in the Rain/Here I Go Again/Give Me All Your Love
NTSC Region Free – 16:9 / Stereo Mix 2.0

Don’t miss the opportunity to enjoy one of the most exciting shows and performers of nowadays Hard Rock scene!