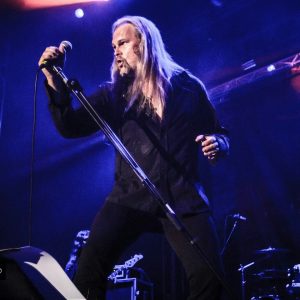 Norwegian powerhouse vocalist Jorn has released a sixth video for his new covers album Heavy Rock Radio. After releasing videos for his covers of Frida‘s (ABBA singer) “I Know There’s Something Going On”, Paul Stanley‘s “Live To Win”, Deep Purple‘s “Stormbringer”, Kate Bush‘s “Running Out Of Time” and The Eagles‘ “Hotel California”, Jorn has unveiled a video for his cover of John Farnham‘s “You’re No Voice.”

Sleaze Roxx stated the following in one of its two reviews of Jorn‘s latest album Heavy Rock Radio: “Kate Bush‘s “Running Up That Hill” and Frida‘s (ABBA singer Anni-Frid Lyngstad) “I Know There’s Something Going On” simply don’t cut it for this sleaze and metal addict but Jorn‘s take on each of those songs not only make them listenable but really enjoyable as well. And that’s where the rubber meets the road for Jorn‘s Heavy Rock Radio. There’s something magical about taking a song that a hard rock / heavy metal lover like myself would most likely not listen to and transforming into a great song. Jorn does that with the two aforementioned Bush and Frida tracks and to a lesser extent with two other original songs that I was not familiar with in terms of Foreigner‘s “Rev On The Red Line” (I know — a little surprising that I wouldn’t know this song) and John Farnham‘s “You’re The Voice.” Where I find that Jorn falls short with Heavy Rock Radio is when he tries to cover songs that are already great in my mind.”