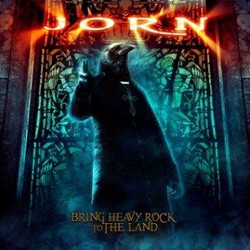 Jorn Returns With ‘Bring Heavy Rock To The Land’

Frontiers Records is pleased to announce the release of a brand new Jorn studio album ‘Bring Heavy Rock To The Land’ on June 1st in Europe and June 5th in North America.

Following a three year silence since the release of ‘Spirit Black’, Jorn unleashes upon the world yet another original studio album ‘Bring Heavy Rock To The Land’ — another slab of classic Hard Rock with metal elements! “I think this album follows a similar Jorn tradition like those before, more heavy rock oriented than metal,” says Jorn, “But as usual it’s not one musical expression all the way through the album, but a variety of musical landscapes within the categories of rock and metal”.

A winning formula should not change, so Jorn has again worked with Tommy Hansen at Jailhouse Studios in Denmark, who mixed the album, ensuring the right edge to the rich guitar and vocal sound that is now trademark to all Jorn releases. The line-up sees the return of Jimmy Iversen on guitar who also appeared on ‘Spirit Black’. The pairing with Tore Moren works really well and gives Jorn’s sound the usual depth and solidity.

As usual, in addition to the original material, Jorn offers some interesting covers. This time Masterplan’s “Time To Be King” and Christopher Cross’ “Ride Like The Wind” are the ones to get the Jorn treatment. “When we wrote “Time To Be King” I heard a different and more rock oriented arrangement in my mind,” tells Jorn, “So after the Masterplan album was released I couldn’t stop thinking about how it would sound if it was recorded with this other arrangement. I don’t know which one’s better, I have ended up liking both versions. As to Christopher Cross, I have always loved “West Coast” oriented music and bands like 10cc, Pages, Santana, Little River Band, Eagles and so on. So I thought “Ride Like The Wind” would be a good song to do Jorn style. Saxon also released a version of this song in the 80’s, and the arrangement we made ended up beeing a mix between the original version and Saxon’s. It’s also a fun song to sing and play”.

Jorn Lande’s strong and diverse voice and solid songwriting skills have now become legendary in the hard rock world. In a career spanning over close to 40 album releases, as frontman for Ark and Masterplan, in addition to featuring on spectacular projects such as Nostradamus The Rock Opera, Beyond Twilight’s ‘The Devil’s Hall Of Fame’, Tobias Sammet’s ‘Avantasia’ and Ayreon.

“If you buy a Jorn album today, you know what you will get,” states Jorn Lande. You are guaranteed to get your adrenaline going with the riveting sound that has solid roots in classic hard rock/heavy metal music such as Dio, Black Sabbath, Rainbow and Whitesnake. ‘Bring Heavy Rock To The Land’ will include the following songs: My Road; Bring Heavy Rock To The Land; A Thousand Cuts; Ride Like The Wind; Chains Around You; The World I See; Time To Be King; Ride To The Guns; Black Morning; I Came To Rock; Live And Let Fly (bonus track).

The title track “Bring Heavy Rock To The Land” (click here to listen to the sample) will be released as a single worldwide on May 14th and can be exclusively listened to in streaming on the Frontiers Records webradio at www.frontiers.it/webradio. A videoclip for the song is in the works and will be directed by Thomas Tjader (Pretty Maids, In Flames).

According to Jorn, “The title track has really a strong Jorn trademark. It was a natural choice for a title track, I felt the same about “Lonely Are The Brave” back in 2008. Sometimes one song’s got the magic and you just know it. “Bring Heavy Rock To The Land” is such a song and regardless of how the whole album is evaluated by critics, I feel that this song will live on and become an essential Jorn classic!”

Jorn will appear live in selected shows in Europe during the summer. For more information on Jorn visit www.jornlande.com and www.frontiers.it.