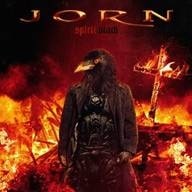 Frontiers Records (www.frontiers.it) is excited to announce the release of JORN’s brand new studio album entitled “Spirit Black” on June 5th in Europe and July 14th in the USA.

Considered by many fans and critics as one of the finest voices in Hard Rock to arrive on the scene at the end of the 20th century, JORN is now ready to unleash upon the world yet another studio album entitled “Spirit Black”. “I have carried some of these ideas with me for quite some time” tells Lande, “Willy, Jimmy, Sid and myself have known each other since the 80’s, and some of the song ideas and demos from back then have now seen the light of day, and become an essential part of Spirit Black. When we were younger we usually never cared about what we did yesterday, only about the future, but the past can sometimes reveal hidden treasures and I discovered great potential in some of these song-ideas”. The result: “Spirit Black” is another slab of classic Hard Rock with 80’s Metal elements which will definitely please all those who loved his recent “Lonely Are The Brave”, released in June 2008.

A winning formula should not change, so Jorn has worked again with Tommy Hansen at Jailhouse Studios in Denmark ensuring the right edge to the rich guitar and vocal sound that is now trademark to all Jorn releases. “The fans can expect a solid and defined record that will shake the classic metal world and hammer the future Jorn legacy in stone” says Jorn. “The sound of the album is like a crossover between “The Duke” and “Lonely Are The Brave”, and I feel that some of the songs on “Spirit Black” have the potential to become essential Hard Rock classics that will stand the test of time”.

Jorn Lande’s strong and diverse voice and solid songwriting skills have now become legendary in the Hard Rock world. In a career spanning over 30 albums releases and as frontman for Millennium, Ark and Masterplan, Jorn was recently featured on spectacular projects such as Tobias Sammet’s “Avantasia”, along with stars like Alice Cooper and Eric Singer (KISS), Rudolph Schenker (Scorpions), Bob Catley (Magnum) and in Arjen Lucassen’s recent concept album “Ayreon”.

“The musical style and direction is now more defined and less experimental. I’m not trying to reinvent the wheel anymore, I just want to write good quality Hard Rock songs that people can relate to and identify with”, continues the Norwegian Viking, “As we entered into the new millennium, I realized and accepted that my strength as a singer was more classic rock oriented. If you buy a Jorn album today, you know what you will get. True classic Hard Rock music”.

Jorn is getting ready to tour the world at the end of summer 09 with his band formed by Jgor Gianola (UDO) and Tore Moren on guitars, Nic Angileri on bass and Willy Bendiksen on drums.

And, as a perfect complement to the new release, Frontiers will finally give a domestic release in the USA to the JORN DVD “Live in America” on July 14th, so far only available via import!