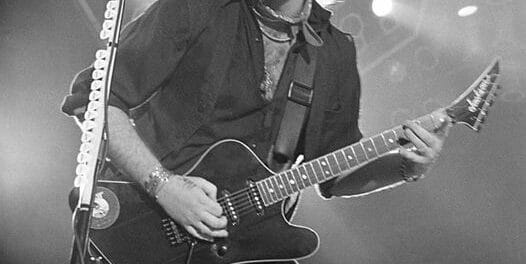 All That Shreds has just published an interesting article outlining a journal written by Curt Dudley who apparently spent a lot of time with Ratt guitarist Robbin “King” Crosby during the latter’s last two years of his life (2000-2002).

In terms of why Dudley‘s journal is only getting released now, Dudley stated: “I have been waiting for the right time to let some of this out. I have struggled with it since the day Robbin died. I wanted to express some of it publicly June 14th, 2002, at Robbin’s memorial service, but the pain was still too much to bear…I felt I would fall apart in front of the 200 odd people (mostly strangers to me) there…so I just stood frozen on the beach & didn’t say anything.” 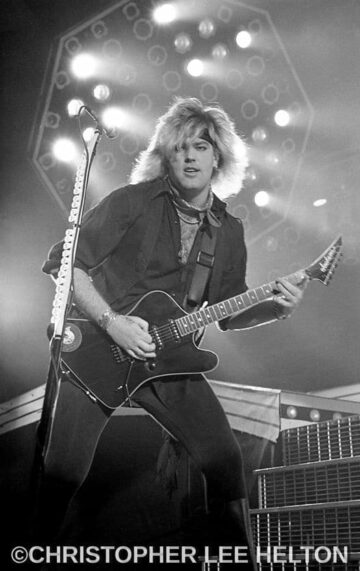 Dudley described his first meeting with Crosby as follows: “‘Do I know you….????’ Is the first thing he said to me. He had that characteristic “King” tone in his voice. After explaining why I was there, we got to talking. Just some small talk & some superficial talk of the ’80’s & RATT. I was there about an hour and something happened to me that day…I left there with a new appreciation for life. Here was this giant of a man lying there unable to walk or even to sit up (he had just had major back surgery) and obviously in a lot of pain and very lonely…yet he was willing to talk with someone he didn’t even know. When I got up to leave he says …’Hey, nice to meet you, would you mind visiting me every once in awhile’. I promised I would. I left there without any autographs…I just didn’t have the heart to ask.”

On Crosby‘s thoughts on Ratt, Dudley reported: “We talked often, naturally, about RATT & his thoughts about success, his bandmates & life the road. He had a lot to say about his bandmates…not all of it good. He would say ‘Listen to the EP…that’s the real RATT…we just got too polished after that.” He loved Warren, “He’s like my little brother” but he felt that Warren didn’t respect his playing after RATT had attained some success. As for Bobby, I asked him one day “If you could have ANY drummer play with you on your new project…who would it be?” His answer: “Blotz….he’s the best there is.” What did he think of Pearcy? “Pearcy is a punk and only cares for himself….he can’t even sing in key live…we had a lot of problems with that on tour.” Juan was his favorite bass player and a very close & dear friend….although they did have their differences.”

In terms of the ill-fated Ratt reunion in 1996, Dudley stated: “At some point in late 1996, he got a call from either ( I can’t remember which) Warren or Stephen…”Get your ass back here, we’re putting RATT back together.” Robbin was extremely excited about the prospect of getting back to LA & putting the band back together. He sold most of his belongings in order to travel light and start fresh in LA. He boarded a plane for LA carrying only the clothes he had and a few carry on items. The night he arrived he met Stephen at a club to talk and immediately got a strange vibe from him. They talked but Stephen seemed distant and cold. He spent the night at a friends house & met Warren the next day for lunch…he got the same vibe from Warren. Frustrated, he finally asked “What is going on …we’re gonna do this, right?” He said Warren said something about “Well… maybe we’ll let you play a few songs on the record.” Robbin said ‘What the FUCK??? LET ME play on a few songs??? I just sold all my shit to move back here to do this!!” Needless to say, the reunion didn’t happen. I asked Robbin “Well Why? What happened?” He started to tear up and said that they thought he was “too fat and was still using drugs.” He was devastated and felt betrayed BUT…in typical Robbin fashion… he was realistic about it. He said, “Well I WAS overweight & still using…so I could understand it.””

With respect to who came to visit Crosby while he was stuck in a hospital, Dudley reported in part: “… Another thing that hit him really hard was that the guys in RATT would rarely come to see him…despite the fact that they all lived within a 1/2 hours drive. He would talk with them on the phone, sometimes Warren, sometimes Bobby, sometimes Juan, and he would hint around that “maybe if you are in the area you could swing by.” They didn’t…

I’m not passing judgment on any of them. I’m sure they all have their reasons. He said to me one day “WHERE ARE all of my friends? No offense, but isn’t it sad that YOU are my best friend? I’ve only known you a year.” He had a way of cutting to the chase…. The only one of his old friends that did stop by often was his old friend “Zloz” …Neil Zlozower.”

Dudley also describes seeing Crosby in the month preceding his death on June 6, 2002:

“In early May I found out that his old friend Patrick had moved in with him…sounds great right? WRONG! Patrick was his old roommate & Heroin buddy. I tried to convince him that Patrick was no good for him & would only tempt him again. He wouldn’t listen…he told me ‘I Love him like a brother and we’ve been thru a lot of together….besides, he has nowhere else to go’.

I knew right then that this was the beginning of the end….He would call once in awhile just to say hello but it wasn’t like before. He did everything he could to discourage me from visiting him…’Oh not today, I don’t feel good’ or ‘The place is a mess’. I could tell he was using again…his speech was slurred & he just didn’t sound good.

Late in May, he started calling me asking me if he could borrow some money…Now, I knew that he had around $9k in cash when he moved into the apartment only a month before. ‘Robbin….where did all your money go?’. He made some vague references about his ‘medication’ and ‘groceries’. I would lie to him & say “I’m broke….now is a bad time, I’m sorry’. It just about killed me to put him off…but I was not about to HELP him destroy himself.

On the night of Sunday, June 2nd, he called & finally cornered me. “Hey, I need you to do me a favor…I need money for my medication….what I want you to do is take my Breedlove (Acoustic Guitar) and pawn it….bring the others to me here. I need at least $300 and I need it tomorrow morning’. I tried to talk him out of it but he insisted. So I did as he asked….

Oh my god, Please NO!! Please don’t let it be as bad as I imagined.

It was….even WORSE than I imagined. Robbin ‘King’ Crosby was sitting in the middle of the room, nude from the waist down in a filthy T-shirt, unshaven, unwashed and barely able to sit upright. He had gained even more weight and had grown a full beard. There were several LARGE open sores on his legs as well. He was white as a sheet & clammy with sweat.

He says ‘Awwww, come here & give me a hug….I’ve missed you’. The room was a mess, everything you would expect from a typical bad R rated movie drug den scene. Bottles of piss, cigarette butts, dirty ashtrays & clothes, beer cans….just about every inch of the floor were covered in trash. The heat & stench in the room were overpowering. His beautiful apartment was a shambles…”

You can read the rest of the journal from Dudley at All That Shreds.