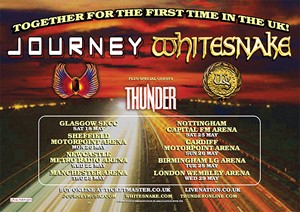 Journey And Whitesnake Team Up For 2013 UK Tour

Journey and Whitesnake, along with special guests Thunder, are set to appear onstage together for the first time ever in May 2013, taking in eight dates across the UK. Tickets go on sale 10am on Friday November 9th priced at £45 (regionally) and £48.50 (London) (subject to booking fee) and are available from www.livenation.co.uk or www.ticketmaster.co.uk.

Journey, one of the most popular American rock bands of all time, are responsible for creating some of the best-known songs in modern music. Over the years they have gained multiple accolades — including 19 Top 40 singles, 25 Gold and Platinum albums and single “Don’t Stop Believin” holding the #1 digital catalogue song in history. In 2011 they drew nearly a million fans to their 2011 Eclipse World Tour which included a sold-out UK leg and ranked in the Top 15 Tours of the year. In the same year the band were awarded the prestigious “Legend Of Live Award” at the Billboard Touring Awards in honour of the band’s significant and lasting contributions to live music and the touring business, and in acknowledgement of their commitment to the fans and the art of performing live. Journey will be joining the tour with their line-up of Neal Schon (guitars, backing vocals), Jonathan Cain (keyboards, backing vocals), Ross Valory (bass, backing vocals), Deen Castronovo (drums, percussion, backing vocals) and Arnel Pineda (lead vocals).

Journey’s Neal Schon said of the tour: “Looking forward to getting back to the UK and playing our best for you all. You guys are the very best, cheers and see you soon. We will be rocking!”

Co-headlining the 2013 tour are the legendary Whitesnake who carry a rightful and righteous reputation as one of the world’s leading rock’n’roll bands. Founded and formed by Deep Purple singer David Coverdale, the band have earned multi-platinum albums and multiple top 10 hits worldwide, including two number 1 singles with ‘Here I Go Again’ and ‘Is This Love’ as well as the unforgettable hammer of ‘Still Of The Night’. Bombast, bravado, talent and passion have helped establish Whitesnake as the perennial platinum favourite they have become and they’re back with a vengeance in 2013, with plans to release a live DVD ahead of the tour as well as a double album. “Unfinished business…” as Coverdale says slyly. “We all wanted the last tour to continue as we got closer to the end… After a year in the studio we’re ready to rock on stage again… We’re coming back for more…”

Harnessing Coverdale’s blues and soul roots and fuelled by incendiary guitarists Doug Aldrich and Reb Beach you have all the elements needed to shape the ‘Snake’s hard rock identity.

Special guests Thunder will also be joining the UK dates. In 2009 the band went their separate ways, only to return in 2011 for a triumphant live performance at the High Voltage festival in London, followed by two sell out Christmas shows. Thunder returned for another two sell-out Christmas shows in 2012, with the date first selling out in just 6 hours. The band has been lured back on to the stage for next year’s tour with Journey and Whitesnake. Perhaps this could re-ignite their desire for more.

Singer Danny Bowes says: “We’d already discussed possibly doing some shows next year, so this is perfect, and it’s a great bill, like they used to be back in the day, it’ll be a brilliant night out”.