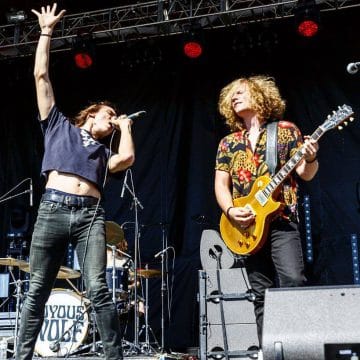 “A gritty howl opens Joyous Wolf‘s debut LP, Enigma, and it’s the perfect introduction since the band plays rock & roll at its most primal and passionate. Guitarist Blake Allard‘s bluesy riffs harken back to the classic hard rock of AC/DC, Cream and Deep Purple while still packing a thoroughly modern wallop, while front man Nick Reese‘s voice seems to come from deep in his gut as he sings about everything from warring kingdoms to a tribute to a fallen friend. Together, with bassist Greg Braccio and drummer Robert Sodaro, Joyous Wolf‘s members work together to create some of the most exciting, promising and unwieldy back-to-basics rock to come out of Southern California in recent years.

Whether nimbly navigating the swaggering, powerful groove of their go-to concert opener, “Mountain Man,” or digging into their instruments for a jammy, funky guitar solo “Major Headthrob,” the group has an unpredictable quality – a sort of unique freedom within rock & roll – that makes Enigma compelling. Part of the credit for this goes to producer Val Garay (Santana, Neil Diamond, Reel Big Fish) who came aboard at the last minute to help them achieve the record’s raw sound, which captures how Joyous Wolf sound live. But mostly, the electric feeling that defines Enigma is just something in the band’s DNA….”