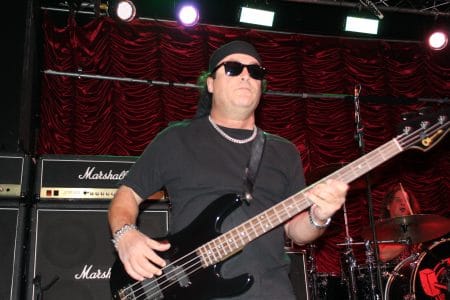 Croucier indicated (as transcribed by Blabbermouth.net): “Listen, the band is firing on all cylinders. We had to, obviously, think fast and on our feet when the changes came. And Pete Holmes had been playing in my solo band for quite some time, so he really knew the RATT material and was really of great assistance to us when we had to audition guitar players. Upon doing so, we had to be very selective with the small group of people because we weren’t really going to amplify that we were in search of a couple of guitar players, which we, by the way, didn’t anticipate. It really sort of came as a surprise — a chain of events, not getting long-winded with regard to it. He helped us audition people.

We got Jordan Ziff and Chris Sanders on board. They’ve acclimated really, really well. The main thing is that we’re all on the same page as far as doing what’s best for the group for the foreseeable future. They’ve really brought fresh blood to the band. I hate using that term lightly; it really is a situation where the band is working cooperatively now together and again, not to take anything away from the past lineups, but at this stage, we all need to kind of agree that we’re going to work. It’s pretty important. Things are going really smoothly. Stephen and I are really happy. Jordan, Chris and Pete are absolutely amazing. And let me tell you one more thing: The band performing live now, in my opinion, is giving you the most accurate representation of the RATT records that I personally believe that we’ve ever been able to achieve. It’s a real treat for fans who want to come and see the band and hear the old songs that we’re known for and we want to represent it in a good light.”

You can read other transcribed excerpts of the interview with Juan Croucier by Music Mania podcast at Blabbermouth‘s website.