Ratt bassist Juan Croucier was interviewed by Marko Syrjala of Metal-Rules back a few months ago and was asked if all the legal stuff surrounding Ratt was over.

Croucier replied: “It’s over. It’s over, and we’re moving on. It was an unfortunate thing, but out of that, I like to look at the positive. Stephen [Pearcy] and Warren [DeMartini] and I came out of it. We survived it, and now we want to do what we do best, and that’s Ratt and Roll. So, I don’t like to get into the details of what happened. It’s public. You can look up everything on the Internet. So, I really don’t have much to add to that. But I’m very thankful that things turned out the way they did.” 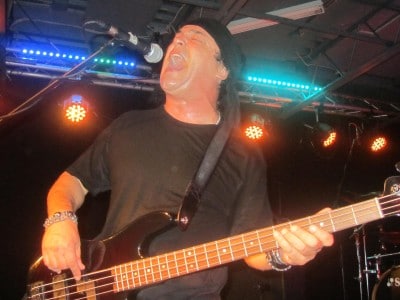 Whether there will be more fighting in the future, Croucier opined: “Not at all. No, it’s cut and dry. It’s been adjudicated. The judge has rendered his decision, and that’s the law of the land. Believe me; he saved the band. I could tell you what I think about it, but I believe that it’s probably better that I just refrain from getting into the details of what I personally feel about it. Because the bottom line is, that we’re moving forward, and Stephen and Warren and I are very happy about that. We have Carlos Cavazo and Jimmy DeGrasso, and so the band is playing better than ever. We take it very seriously, and we intend on building it and being consistent, and that’s very important. We haven’t been in Europe for a long time. We stopped… We started touring. We did the M3 festival in Columbia, Maryland and then we stopped and then a period went by. Then the next summer we did a series of shows. We did about 20, approximately 20 shows. We were about to start up again, and then we stopped. We did a handful of shows in 2014, and then everything came to a halt. So now we want to do these plenty of shows, and then in 2018 come right back again and keep going. I don’t like to make promises because I’m one of the… I’m the kind of guy that, look, if we’re making a record, then we say we’re making a record.”

You can read the rest of the interview with Croucier at Metal-Rules.

While Croucier opined that the legal issues surrounding Ratt are over and drummer Bobby Blotzer keeping a low public profile since in or about March 2017, Seann Nicols, the singer for Blotzer‘s version of Ratt and Westfield Massacre, advised Sleaze Roxx as follows in an interview last month: “The status [of Blotzer‘s version of Ratt] is the same as it was. Bobby and I are still in communication. I know that he recently underwent back surgery so he’s in recovery and he is just working on feeling better. He’s obviously got a lot of legal issues that he’s trying to sort out with the trademark and fighting with the other guys from Ratt. But from what I’ve seen, it seems that Bobby does have legal ownership over the trademark and it’s just going to take some time for him to get it all sorted out in court. So that puts his business with Ratt on hold while he gets that sorted out.”

Nicols also stated: “…So clearly, the legal process is moving slower than Bobby would have wanted. To my understanding, there is an appeal on the horizon. There was a [motion for] summary judgment that went against a judgment that was made several years prior so Bobby’s attorneys now have to go through the litigation process to get that summary judgment overturned. That’s my understanding of the situation so if/when that happens, I’m ready to go and I know Bobby is very excited to play. He strategically planned his surgery around this legal stuff so that he could heal up and get the whole legal thing settled so that he could be prepared to go out and play again in 2018. So everybody is still moving in the direction of playing together again in the near future.”