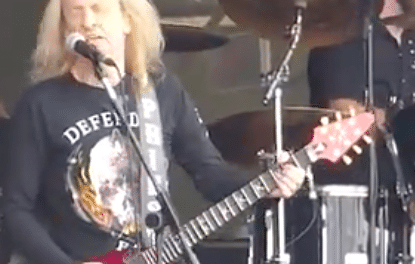 Judas Priest do not intend on including K.K. Downing in their 50th year anniversary celebrations

It appears that former Judas Priest guitarist K.K. Downing will not be included in the band’s 50th year anniversary celebrations. Ever since guitarist Glenn Tipton has had to bow out of Judas Priest‘s tour in support of their latest studio album Firepower due to complications with his Parkinson’s Disease, Downing has been making public comments about his interest in rejoining the band. However, his former Judas Priest bandmates have not seemingly entertained this possibility. 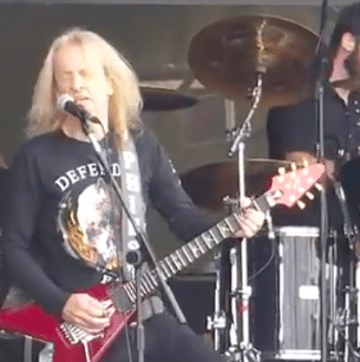 In a press conference at the Hellfest Festival in Clisson, France, which took place from June 22 to 24, 2018, Judas Priest bassist Ian Hill stated as follows (as transcribed by Sleaze Roxx) in terms of Downing rejoining the band: “I didn’t know, really, where he was coming from with that comment. I think he just played a bit of mischief, to be honest. I mean, Ken‘s place in the band has already been taken; he’s sitting right there you know [referring to Faulkner]. It’s also two albums down the road since Nostradamus, which is the last one he played on, and is he gonna be prepared to play music from the new album you know, which he probably would not. And on top of that, he’s gonna have to learn Glenn‘s parts too. So it’s all reasons why we didn’t [ask him to return]. Apart from that, he’s been retired for nearly eight years. He hasn’t since set foot on stage as far as I know, so you know he’s hardly at the peak of his game at the moment. So, yeah, I wasn’t quite sure where he was coming from with that — I really don’t. I think it might have been just a bit of mischief.”

Since then, Downing has returned to performing live, first with Ross The Boss at the Bloodstock Open Air Festival in Catton Park in Derbyshire, UK on August 11, 2019 and then with former Judas Priest bandmates Tim “Ripper” Owens (lead vocals) and Les Binks (drums) along with guitarist A.J. Mills and Megadeth bassist Dave Ellefson at K.K. Downing’s Steel Mill in Wolverhampton, UK. on November 3, 2019.

Those live performances were apparently not enough to sway Judas Priest to welcome back Downing into the fold.

”First of all, I want to once again express my huge appreciation to all fans worldwide for the overwhelmingly positive response to my Bloodstock appearance in August and the Wolverhampton gig in early November. I am truly humbled and grateful.

I am also taken aback with the compelling fan outcry for me to participate in the Judas Priest 50th anniversary celebrations next year. Consequently, I felt the right thing to do was to reach out to my former band-mates to gather their thoughts on this, and their response is they are not receptive to my participation in the band and they do not intend to include me in the 50th anniversary celebrations.

However, the great news for the fans is that I will be continuing to forge ahead, I am looking very much forward to seeing you all on the road in 2020. Together we will take on the world”